The Samsung Galaxy Grand Neo has an attractively large screen, which is a definite usability boost despite its relatively low resolution. Best of all, despite the big screen, it's still easy on the battery. Our proprietary battery life rating turned out above average.

We are already getting kind of tired of the same overused design language from Samsung, but at least this time around we get a matte back panel, which is a nice break from the shiny fingerprint magnets.

The 5MP camera is actually OK in terms of quality, though the 720p video recordings are nothing to write home about. While, understandably, not all of the Samsung proprietary flagship software features are present in the entry-level device, Multi-view and Samsung Link, among others, were welcomes software additions you simply won't find from lesser manufacturers.

The Broadcom BCM23550 chipset used in the Galaxy Grand Neo is a good budget solution that happily takes on dual-core Cortex-A9 chips, but it is a bit behind its quad-core Cortex-A7 peers (with chips from other makers) when it comes to graphic-intensive apps such as games. 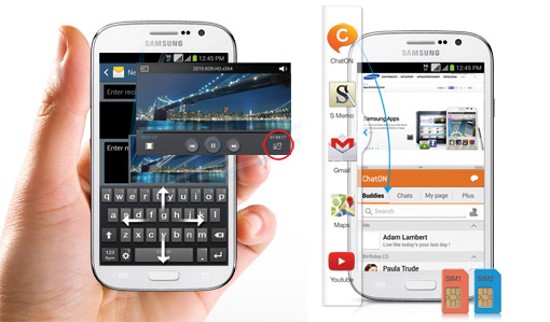 The Galaxy Grand Neo finds itself in the rather precarious position of being a large-screened smartphone in a market segment that typically doesn't have such devices. Thanks to that and its new Neo branding, which Samsung will likely use on devices placed somewhere between the latest two generations of a particular lineup, it is actually quite uniquely positioned.

The most obvious comparison, however, is with the original Samsung Galaxy Grand. With the exception of the processor, camera, and Jelly Bean build, the two devices are essentially identical. While the Neo does have a quad-core chipset, we found it to be faster in only half of the use cases. Furthermore, the downgrade of the Neo's camera in terms of raw megapixels and video recording is a disappointment. What's worse for the Neo is that currently, it's priced even slightly higher than the original Grand, putting it in a rather disadvantageous position.

Another big-screen alternative comes in the form of the Sony Xperia C. Its 5-inch display comes in at 540 x 960 pixels in resolution resulting in a higher pixel density, while the 8MP shooter is capable of 1080p video. Its quad-core MediaTek CPU outperforms the Grand Neo across the board, and there is also a larger battery. Unfortunately, the Xperia C isn't available in some markets, which could make it hard to come by at the same price you would get the Neo for.

Viable alternatives can also be found from some of the less popular manufacturers. The Huawei Ascend G700 sports a 5-inch display of 720p resolution, and even doubles up the RAM to 2GB. It uses the same quad-core 1.2GHz MediaTek chip as the Xperia C so it should handily outclass the Neo's Broadcom solution. The sub €200 price point also helps its case.

The ZTE Grand S Flex is slightly more expensive than the G700, but throws LTE support into the mix, an upgraded camera, and double the internal memory. It only has a dual-core processor, but it's of the Snapdragon variety so it should still beat out the one on the Grand Neo.

Finally, the freshly-announced Galaxy Grand 2 is poised to be a much more worthy successor to the Galaxy Grand than the Neo. It's slightly larger but it's thinner. It's got a 5.25" 720p display and 1.5GB of RAM. It'll retain the Grand's 8MP 1080p-capable shooter, while bumping up the front-facer to 1.9MP. Oh, and did we mention the LTE support, 2,600 mAh battery, and the up-to-date Android 4.3 build? Obviously, the Grand 2 will run you more than the Grand Neo, coming in closer to €300 (at the time of writing).

Currently priced around €250 euro, the Samsung Galaxy Grand Neo is definitely a tough sale. It actually has a balanced feature mix but this sort of price puts it in some bad company - Samsung's own Grand and especially the Xperia C both match or improve many of its features, and both are priced lower than the Grand Neo.

If you are after the extra large screen (with dual SIM support for good measure), the Galaxy Grand Neo would be a viable alternative only if it drops to a commitment-free price of around €220 or lower. Until then, it would hardly make it further than a bench-warmer while other more sensibly-priced options will see plenty of action.