With its 5-inch screen the Samsung Galaxy Grand Neo measures 143.7 x 77.1 x 9.6 mm, virtually identical to the original Galaxy Grand - the two being separated by only 0.2mm in height and width.

Weight-wise, the Grand Neo comes in at 163g - again just about identical to the original Grand.

The Galaxy Grand Neo follows the rather predictable and uninspired design Samsung has been using on its more affordable offerings for quite some time now. The matte finish on the back, however, is a breath of fresh air, as it doesn't feature the fingerprint-prone gloss found on most entry-level Samsung's.

Despite the tired design, the matte finish is a welcome extra

Below the display you get the usual three navigation keys.

The usual set of keys sit below the display

Above the display rests an earpiece and some sensors for proximity and ambient light, as well as a front-facing camera.

There's an array of sensors next to the front-facing camera

The only two buttons on the sides of the device are the volume rocker on the left and power/lock button on the right.

Up top is a 3.5mm audio jack, while at the bottom you'll find the microUSB port and microphone pinhole.

The 3.5mm audio jack on top • microUSB port on the bottom

Around the back is the 5MP shooter flanked by an LED flash and a loudspeaker grille.

Taking off the back panel is a bit of a pain as the tabs, which hold it in place, are a bit overzealous. Underneath, you'll find the removable 2100mAh battery alongside the SIM and microSD card ports, neither of which is hot-swappable.

The removable back panel reveals the battery and card slots

Battery life of the Grand Neo turned out to be a very respectable 59 hours, thanks in large part to its great standby time. Voice calling was another area where the 2,100 mAh battery excelled, while web browsing and multimedia videos aren't as good. 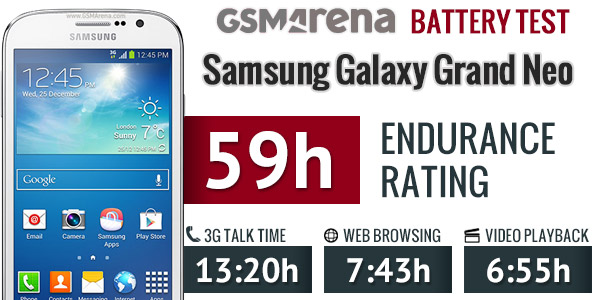