The Galaxy Note5 may be a blend of the S6 and the Note 4, but the Galaxy S6 edge+ is really just an enlarged Galaxy S6 edge. The aptly named phablet brings the dual-edge experience to the big screen, while adding a few minor touches of its own.

Of course, the design is not as striking as the original Note Edge, but we already knew that from the S6 edge. You do get a curve on each side though, so the S6 edge+ is equally well suited to all users, regardless of which of their hands is dominant, a key advantage over the predecessor, if we could call the Note Edge that. 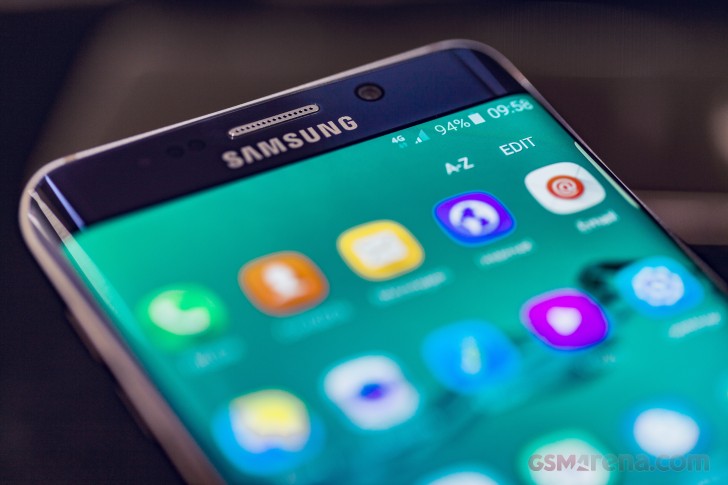 In theory large size lends well to higher screen-to-body ratios since bezels need to contain the same elements and thus don't need to grow proportionately in size. The Galaxy S6 edge+ is a fine proof of that principle and it's one of the two subtle hints that you're looking at the phablet, and not the phone, when you have no bananas for scale.

Galaxy S6 edge+ from all for sides

The other design change, and you can tell we're deliberately looking as close as possible, is that the S6 edge+ has done away with the slight curves of the top and bottom of the non-plus device and the edges are now straight. In fact, much like the case of the Note5, compared to the S6.

The Galaxy S6 edge+ measures 154.4 x 75.8 x 6.9 mm - a millimeter taller than the Note5, but marginally narrower. It's also 0.7mm thinner than its productivity-focused sibling, and also a fraction thinner than the original S6 edge.

Galaxy S6 edge+ in the hand

We were stunned to find out that the S6 edge+ weighs only 153g - that's a whole 18g less than the nearly identical Note5, so some S Pen it must be. As you'd imagine, the difference is easily felt in the hand as well, making the Galaxy S6 edge+ the obvious choice for gentler hands and small purses.

It's still best operated with both hands, gentle or masculine alike, as there's no going around the fact that it's a 5.7-inch device. There is a one-handed mode as well, which shrinks the entire interface to a bottom side corner, but in the past it has proven more of a gimmick than a truly valuable feature, and we don't see it being used any more often here.

The edge screen has a bunch of features, carried over from the 5.1-inch Galaxy S6 edge. We've always been fans of the Night Clock, though we're still wondering why it can't just be Clock and stay on at all times. The Information Stream is present too to keep you up to date on current events from your favorite feeds. Edge Lighting is also on board, though the question remains why you'd keep your precious dual-edge device face down on a flat surface.

Galaxy S6 edge+ from up close

People Edge has gotten a nice companion in the form of Apps Edge, which gives you access to app shortcuts of your choice with a second inward swipe. In a way it's similar to the Edge screen on the Note Edge, though here you get to keep the dock on the bottom of the main display. It has its use as a potential alternative task switcher, or a quick app launcher available from any screen.

You can watch our brief hands-on video below, where we've shown some of the features.