Now that we've gotten the technical details out of the way it's time to take a look at the provided quality of stills. For the purpose we've prepared a number of 100% resolution crops taken from both cameras images. No further processing has been applied so that we can see how these two cameras perform in real life.

In daylight the Samsung Galaxy S5 has the clear advantage in resolved detail. The ISOCELL technology promises to let in more light per pixel which should translate into less noise and hence better detail resolving.

The G2 exposes shadowed areas of the scene a little better but that doesn't mean it delivers more detail. There's quite a bit of noise in those darker regions. The G2 images are also a little softer but given the Galaxy S5's overeager sharpening we don't see this as a bad thing - the G2 offers sharp images, just less so. 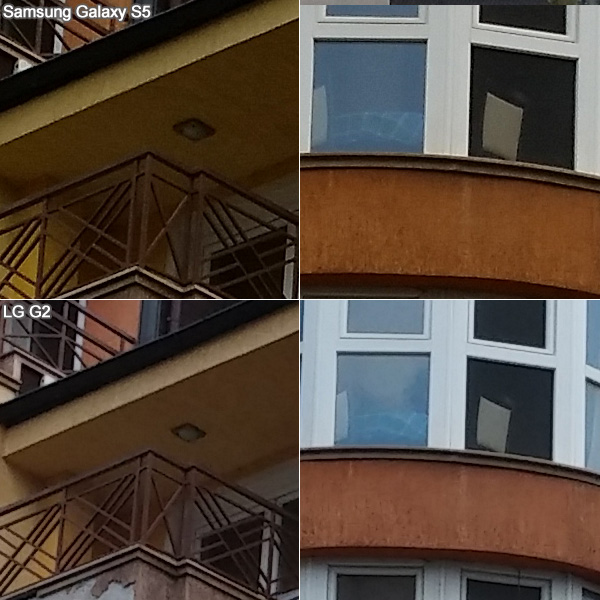 Next up we can see how both cameras handle detail that's further away from the lens. In unfavorable lighting conditions both devices struggle to capture any detail in the shadows. Still the Galaxy S5 has a slight advantage and a little more detail (see the crop on the left).

Colors on the Galaxy S5 are a little warmer, while the G2 loses some contrast, which results in slightly washed out colors. While the Galaxy S5 offers a little more detail overall, its oversharpened look ads for an impression for a wider gap. 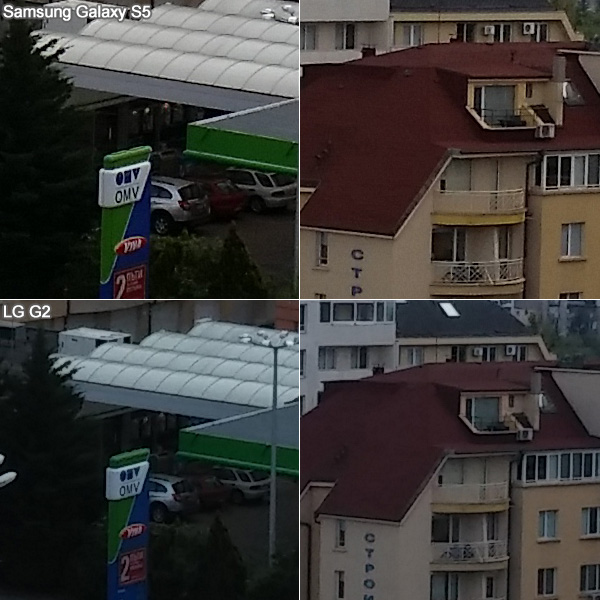 You can have a go at the full-resolution images of both devices below. These are the 16:9 16 MP Galaxy S5 samples.

The Galaxy S5 was able to take advantage of its more advanced hardware to best the good LG G2 in favorable light conditions.

Moving on to high dynamic range imagery where in order to capture equally well exposed photos the two cameras capture a sequence of three shots - an underexposed, and overexposed and a normal image and then combine them into a single shot. The advantage of this HDR mode is that the cameras are able to capture much more of the extremely dark and bright areas of a particular scene.

Both cameras have a specific mode for shooting HDR - it's called RichTone for the Galaxy S5 and Dynamic Tone for the LG G2.

First off let's take a look at what HDR brings to the Galaxy S5 samples. In the crop below you'll see a normal sample on the left and an HDR sample on the right - note that both samples are from the Galaxy S5, the LG G2 follows in the next crop.

The Galaxy S5 offers a pretty good dynamic range in its images. The upper crop showing the building with the sky and mountain in the background is almost entirely the same, detail and exposure-wise. The HDR sample has lightened up the foreground and background a little but since this part of the image has been well exposed in the normal shot, the difference isn't dramatic.

The crop on the lower right and left part shows a portion of the scene that wasn't exposed well in the normal shot. Here the HDR mode brings back much more detail and has done a very good job of exposing the overall scene. 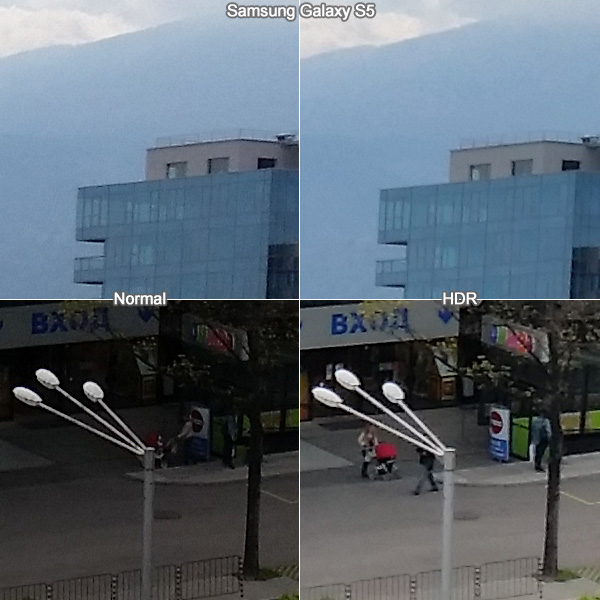 Here's the full HDR sample with the non-HDR sample alongside it.

As for the LG G2 - it provides a better overall exposed image to begin with - note that the darker part of the scene is still lighter than on the Galaxy S5's normal shot. But HDR does add a little more exposure to the scene and brings some additional detail to the clouds in the upper crop. The images of the LG G2 once again look softer, but they're not soft. It's just that Galaxy S5 tendency to oversharpen things we mentioned earlier.

It's pretty close but the LG G2 manages to squeeze more light out of the image - without HDR. With HDR it manages to bring exposure to the darker parts and do its job perfectly. 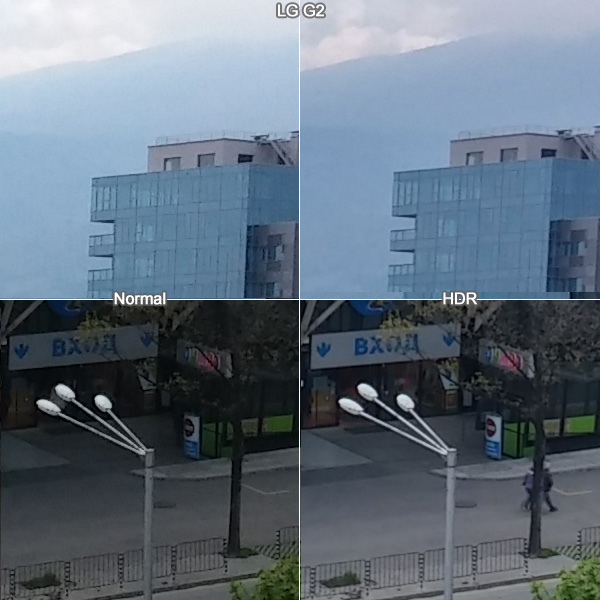 Here are the full-resolution samples if you want to check for yourselves.

Low light is an area where the Galaxy S5 should have the advantage thanks to the ISOCELL and wider f/2.2 aperture. We shot one normal sample without flash and one with flash. Watch out for the skin tones in the flash sample.

Jumping straight into the results - the Galaxy S5 looks to have a little more detail into its normal shot. The difference isn't that great, though, and thanks to the oversharpening you can see the edges of the subject become rigid, whereas the G2 handles them better. The latter goes for colder tones while the Galaxy S5 uses more natural-looking, warmer colors.

When using the flash, the coldness of the G2 gets accentuated but the detail levels jump a notch thanks to the LED. The Galaxy S5 also manages to squeeze more detail into the subject and the rigidness of the edges.

The LG G2 is a little softer which looks to be because of some aggressive noise reduction. The Samsung Galaxy S5 carries some more noise but also more detail. 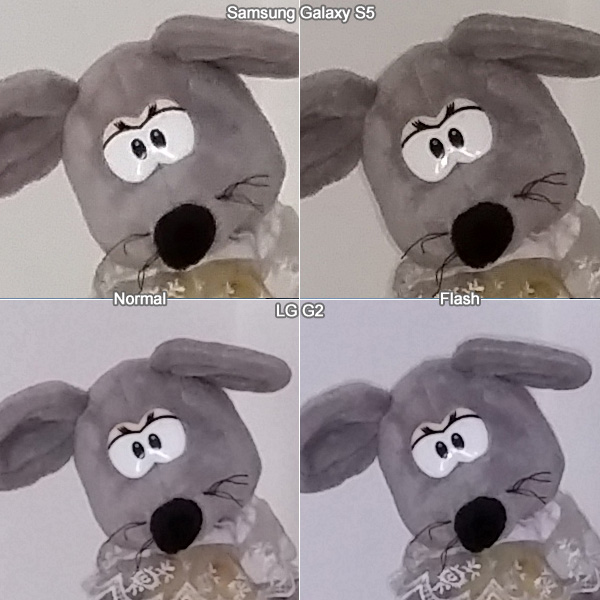 You can see the difference between the normal and flash-on image of the Galaxy S5 below.

It was a pretty close one but the Galaxy S5 was able to capture a little more detail. The LG G2 has one of the slowest focusing times in low light we've seen on a phone while the Galaxy S5 retains its fast focus even in low light. This will provide you with more, in-focus shots with the Galaxy smartphone.

Finally, if you want to check out our photo quality comparison tool you can do so below. It shows the two devices side by side and you can compare resolution performance (in our ISO chart), color performance and overall detail capture, too.