If Sony and Samsung were schools, the Xperia Z2 and Galaxy S5 would be their top achievers. They will be the ones starring in a video telling you how much they've learned about design, photography and music. In short, they stand for the best of what both companies can do and implicitly promote their broader product lines. 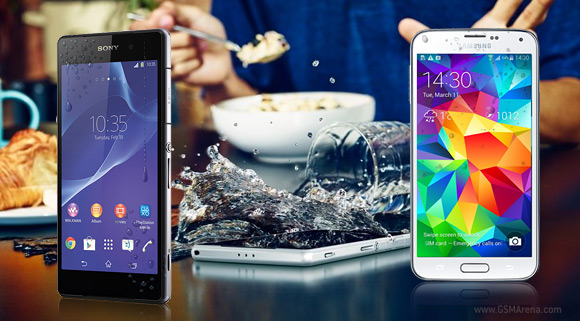 Sony has always been a hardware company first and a software company by necessity. The Xperia Z2 design certainly makes it one of the most attractive handsets on the market, even if the bezels around its 5.2" screen could use some slimming.

Speaking of the screen, Sony finally found the right formula for a beautiful display, but the company - inexplicably - continues to struggle with the camera. This is the third phone with Sony's whopping 1/2.3" sensor yet there are still issues with image quality.

The move to front-facing stereo speakers help steal some music cred from the HTC Ones, while the battery life is another vote in Sony's favor.

On the software side, the Xperia Z2 keeps things relatively light. The UI is touched-up stock Android and the major app contributions come from Sony's staple businesses - camera, music and gaming.

In broader terms, Samsung has never had the premium image of the Japanese, positioning itself firmly in the mass market. This reflects in the Galaxy S5 - if you had to pick one word to describe it, it would be "utilitarian" rather than "trend-setter". Admittedly, the Koreans are learning good design too.

Plus, the giant screen manufacturing plants for screens and camera sensors came through in a big way this year.

The mass market soul of the Galaxy S5 shows through in TouchWiz, there's a feature for everyone. The Xperia Z2 has all the features you would expect of a 2014 flagship, but the Samsung Galaxy S5 expertly backs apps with hardware features - the fingerprint and heart rate scanners enable functionality outside the reach of even the Apple iPhone 5s (where fingerprint reader is exclusive to native services).

In the end there's no need for a sign pointing glass design fans one way and camera buffs the other. The Sony Xperia Z2 and Samsung Galaxy S5 have more in common than their predecessors ever did. We know how that battle went on a market level, but this year, on a personal level, the choice between the two comes down to the most subtle of personal preferences and taste.