HTC has a history of metal unibodies, most of which are part of the recent One series and they have come in all sizes (mini and Max). The HTC One M9 uses the blueprint of 2013's One, with some refinements - an eye-catching dual-color design, a microSD card slot and improved handling. 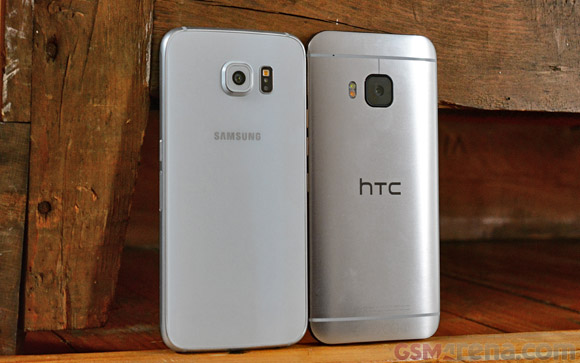 HTC had a full year to work on the new body. The dual-tone design is unique and comes in several attractive color combos apart from the traditional Gunmetal Gray. What HTC hasn't done is make it meaningfully more compact - it's a couple of millimeters shorter and one millimeter narrower, but it's practically the same thickness and weight several years in a row now.

In all fairness, the metal unibody has certainly contributed to the extra weight and the One M9 also has a bigger battery than its predecessor (2,840mAh). The stereo speakers on the front are the excuse for the size of the phone, which is on the large side for the 5" class.

Samsung actually cut the battery capacity (to 2,550mAh) to reach the desired thickness (and the resulting weight). We'll see a bit later how that affects the battery life. Also, the camera on the back quite noticeably protrudes beyond the 6.8mm thickness.

The company also had to put a taller hardware Home key as it houses the fingerprint scanner and it's the better no-swipe design.

So, Samsung has made some questionable tradeoffs (battery capacity, protruding camera lens and home button) to make the phone slender and as a result the slim glass and metal combo feels quite good in the hand. The HTC One M9 in comparison feels a bit chubby, though its curved back and pointier side frame balance that out.

Samsung Galaxy S6 and HTC One M9 are basically the same height and width, but the S6 is much thinner

Samsung's choices may be a bit controversial, but HTC has less to show for a year of work - a couple of hundred milliamps in the battery are not much progress when other manufacturers are competing in cutting down thickness and bezels.

The way the HTC One M9's body is shaped is that the metal coming from the back overlaps the metal coming from the front, but not completely. This leaves a small ledge, which improves handling (the smooth finish back can be slippery). This ledge, however, kind of looks like a case that doesn't quite fit the phone - when a phone aspires to be the prettiest on the market, it shouldn't look like it's wearing ill-fitting clothes. Of course, looks and aesthetics are a subjective thing.

Samsung's design is flatter. It has an exposed aluminum frame on the side. It's smoothly chamfered and the Gorilla Glass 4 on top and on the back is slightly chamfered too - the transition between metal and glass is not perfect but it makes holding the phone quite comfortable with no sharp edges.

The back is not completely flat, but instead gently arced. That glass doesn't offer much grip though, you have to rely on the matte finish metal on the sides. Still, the phone is 20g lighter than its opponent, which does help in handling.

Going back to the front, the HTC One M9 is at a bit of a disadvantage with a 5" screen vs. the 5.1" screen of the Galaxy S6. That's not much, but the on-screen buttons on the HTC further reduce the screen real estate, even though there's a pretty roomy black bar between the screen and the bottom speaker that does nothing.

Samsung once again uses a hardware Home button, but this time by necessity - it's where the fingerprint scanner lives. You don't have to swipe anymore and you fingerprint will be recognized at any angle. Having to swipe just the right way on the Galaxy S5 was quite inconvenient, so this is a big improvement, which will lead to increased adoption by users.

Above the screen are the selfie cameras - a 4MP UltraPixel from HTC (the former main camera of the previous One flagships has fallen from grace) and a 5MP shooter from Samsung. Both feature HDR mode, but the Samsung selfie camera can shoot QHD video while the UltraPixel shooter tops out at 1080p.

The One M9 also features the trademark BoomSound speakers, which make it a portable boombox. The Galaxy S6 has only one speaker (on the bottom), so it doesn't provide the same stereo experience for music and videos.

Also on the bottom is the 3.5mm audio jack and the microUSB 2.0 port (both phones share this arrangement). Samsung dropped the USB 3.0 since the port is harder to fit on thin devices and wired data transfer is pretty rare these days.

Both phones have their 3.5mm audio jack and microUSB port on the bottom

Both phones support fast charging. Samsung is promising 4 hours of use or 2 hours of HD video playback after just 10 minutes of charging. HTC meanwhile uses Qualcomm's FastCharge 2.0, which fills the battery from 0% to 60% in half an hour.

You'll need a different charger though, the one that comes in the HTC box isn't powerful enough. In contrast Samsung provides an Adaptive Fast Charger in their retail box.

Samsung has another way to offset the smaller battery capacity - wireless charging support. The Galaxy S6 supports the two main standards out of the box, Qi (used also by Nexus devices and installed in some airports) and PMA (installed in some Starbucks and McDonald's locations).

Samsung spread the side keys on the left (volume rocker) and the right (Power button). They are easily reachable with the index finger and thumb. HTC meanwhile put both on the right, which means you can only use your index finger or your thumb (depending on which hand you hold the phone in). Also, we pressed the volume keys instead of the Power key plenty of times while getting used to the setup.

HTC added a microSD card slot on the One (M8) and the M9 has kept it. Samsung surprisingly dropped the microSD slot even though it was a Galaxy S staple. Samsung explains that for top performance the phone needs fast storage and microSD cards (the cheap ones especially) don't cut it.

We get around to the back. The HTC One M9 back is metal and houses a 20.7MP camera. Its protective glass protrudes slightly from the back and to its left is the dual-LED, dual-tone flash.

The Samsung Galaxy S6 back is made of Gorilla Glass and as we mentioned, the 16MP camera sticks out quite a lot. To its side is a single LED flash along with the heart rate/blood oxygen saturation sensor.

Samsung skipped the waterproofing on this generation flagship, so you'll have to wait for the Galaxy S6 Active if you want to jump in the pool with your phone. The HTC One M9 doesn't have any special protection from the elements either.

Winner: Samsung Galaxy S6. A major break from the tired plastic build of its predecessors, the Galaxy S6 has a premium feel to match its rich spec sheet. It's thinner - not the thinnest but still quite thin - and its metal and glass design looks great. No memory expansion and no removable battery have drawn some critics, but that may prove to be a vocal minority.

The HTC One M9 is a beauty, but so were its two predecessors. It could have been more compact to account for two years of progress. Right now the dual-tone design (while very attractive) is the only visible sign of evolution in design.