As any self-respecting flagship should, the Samsung Galaxy S7 ships with Google's latest available OS version, Android 6.0.1 Marshmallow. On top there's the obligatory TouchWiz layer, in its latest iteration too.

What that means is that the S7 has conceptually a lot more in common with older Samsung models than it does with stock Android, and that's been polarizing customers and reviewers alike for about as long as there have been Galaxies. 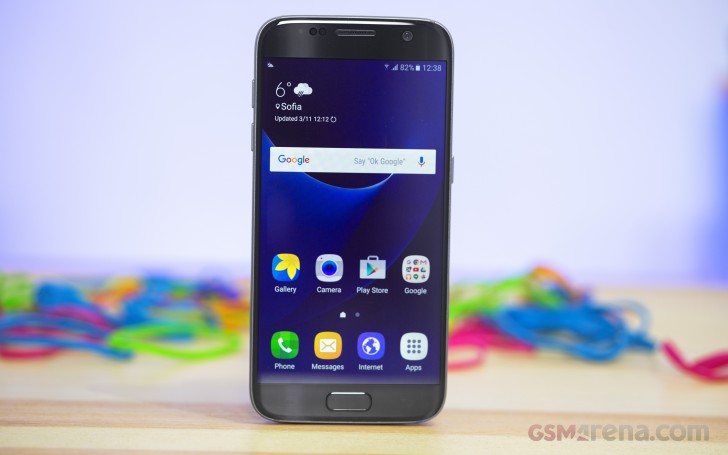 The lockscreen typically holds a clock and date with two shortcuts in the bottom corners for Camera and Dialer. You're likely going to be launching the camera with a double press on the home button if you need the absolute quickest access, so that makes one of the shortcuts redundant. Good thing then that each of them can be changed to any app you have installed.

Fingerprint unlock is a must have-feature and Samsung has been sticking with the press-and-hold variety since the S6. Or wake-and-tap, should you decide to wake up the phone with the power button. Either way, you need to wake it up first, the sensor isn't always on, which wastes precious milliseconds.

It does work well and if for some reason it cant recognize a finger in 3 tries, it lets you input the backup password. Ignore it and unsuccessfully try with a finger twice more and you'd be locked out of your device for 30 seconds giving you time to come up with a different tactic.

The screen features a new Always-On function, which, as we established on the previous page, draws about 1% battery charge per hour. You can set up a time period, during which the feature will be on - some will lean towards a night-clock type of schedule, while others may prefer to be able to get a quick glance at notifications with the phone lying on the desk at work.

Besides the time and date, the screen can be set to show a subtle wallpaper to make things a little fancier. You can download additional always-on themes from the store.

Size aside, the homescreen is identical to the TouchWiz home of other Samsung phones. However, Samsung has chosen a four-in-a-row default setup on the S7, with large, easy to tap icons. The dock can fit five, and so can the homescreen - grid size can be 4x4, 4x5, or 5x5.

The Galaxy S7 user interface has theming support. We only got one theme pre-installed, but the Theme store has a vast selection available to download.

Depending on where you are in the world, your leftmost homescreen would be either the Flipboard-powered Briefing or a new service called Upday (this is the one we got on our international unit). The two do pretty much the same thing – they aggregate news according to a pre-defined list of interests.

Upday instead of Briefing

The app drawer can be arranged alphabetically, or in a custom order, and a search function is provided. You can alternatively disable the app drawer altogether, making for a single-tiered interface. That last feature is part of Galaxy Labs and is still experimental, so we may or may not see it in as part of the standard TouchWiz in the future.

The Notification area is pretty busy by default. It starts with a scrollable line of quick toggles on top, then a brightness slider, then the Quick connect button. You can hide the latter from the Edit option, which also lets you re-arrange the quick toggles.

Split-screen multitasking is supported on the S7, even if the 5.1-inch display doesn't appear to offer all that much room to maneuver. As always, only supported apps can work in split-screen, but Samsung's implementation is the most widely supported. Floating app windows are available for some apps, too.

Some cool gestures are available for the Galaxy S7 - you can flip the phone for mute, swipe your palm for screenshot, double-press the Home key for quick camera access, quick call, among others.

The Samsung Galaxy S7 comes free of bloatware, but has a few Microsoft apps pre-installed (MS Office, OneDrive with 100GB for 2-years, Skype). The phone starts with 32GB, but a quarter of that (7.5GB) is already used up by the system. You can rid of the MS apps and some of the Google's apps (Drive, Photos, Hangouts), and you can free up additional 500MB.

Oh, by the way, Samsung has followed other manufacturers and implemented a scrolling screenshot feature, which works well when having to capture long web pages or lists. Too bad that YouTube keeps giving you more results and that list can go on forever.

Samsung Game Launcher is a new app/service, which groups all of your games at one place. But that's just the beginning. The Game Launcher has a few powerful tricks, some of them a must have for avid gamers.

Next, the Game Launcher has its own DND mode - you can disable all alerts during a game.

Finally, there is the Game Tools key. It's a small floating virtual key you can position pretty much anywhere on the screen. Once tapped, it reveals additional actions such as No Alerts, Lock Recent and Back keys, Minimize Game, Take Screenshot, and Record.

Locking the capacitive keys is crucial for a seamless game experience, as we found ourselves closing accidentally a game two times in just under five minutes!

The Record option is rather interesting. It captures a video of your game, but you can choose to either capture the in-game audio or record external sound using phone's microphone. The video recording also supports a watermark - you can set a static picture, or use the front camera to embed yourself in the video. YouTubers will find those very useful.

The Game Launcher also offers Top Charts and Featured Videos tabs, where you can check some nice game stats, and find helpful videos about your games.