The gallery has face tagging

The gallery or Media Browser, as Samsung call it, is basic - all images and clips are displayed all at once as small thumbs. When you select a file you can see it in either portrait or landscape mode.

Pinch zooming is also available here thanks to the Samsung S7230E Wave 723 multi-touch support but you can also double tap on the screen to zoom in and out. Zooming in is not the most responsive or fastest we’ve seen – there’s definite room for improvement here.

The Media browser can organize files by date, by tag, view favorites and the best feature – view them by person. When you tag someone’s face, you have the option to view all photos with that person.

The first Wave was a grand master of videos. The Samsung S7230E Wave 723 however is more modest. It failed to play videos with resolution higher than WQVGA and it was picky about codecs.

We found that .MP4 and .3GP files worked (if the resolution wasn’t too high) and .AVI files with DivX and XviD encoding failed to play. WMV files almost worked – the Wave 723 managed to generate a thumbnail for one our test videos, but ironically it was the high resolution one. The other WMV videos we tried gave an “Unsupported video codec” error. So, don’t rely on WMV playback (we think no one is still using those, so it’s not a huge loss).

Interestingly, you can jump to specific scenes using the "Mosaic search" feature. It breaks the clip down to several parts and displays the first frame of each to help you find the scene you're looking for.

The music player, unlike it’s video playing counterpart, was up to the task. Tracks are sorted by albums, artists, genres, composers, etc. You can hide some of those sorting options if you don't use them.

While the music player is working, track info and playback controls appear in the notification area. Cover Flow like browsing mode is available as an alternative to a plain old list. Alternative visualizations are available when there’s no album art.

Part of the music player is also the traditional Samsung music recognition feature that lets you record a few seconds of a currently playing track and it gets back to you with the name of the track and artist. Another interesting feature is Find similar, which uses an online service to find similar to the current track. You can also add tracks to a wish list.

The Samsung S7230E Wave 723 is equipped with an FM radio with RDS too. You can also listen to the FM radio on the loudspeaker, but the headset is still needed as it serves as an antenna.

Up to 6 stations can be saved as favorites and the All channels menu holds the rest. FM audio recording is also available. The recorded files are stored in decent MP3 format in your music folder.

We found the Samsung S7230E Wave 723 to be something of a mixed bag when it comes to its audio output quality. The handset is loud and fares well when pluged into an external amplifier but plugging in a set of headphones makes it mediocre.

With no resistance applied to its line out (which will be the case if you plug the Wave 723 in your car stereo or your home audio system), the handset might not break any records but isn't too terrible to listen to. Its scores are all slightly below average but there are no disastrous readings in sight.

When headphones come into play however distortion levels raise drasticly and stereo crosstalk increases so it's a rather mediocre performance we are left with at the end. The pre-production status of our unit could as well be to blame here. 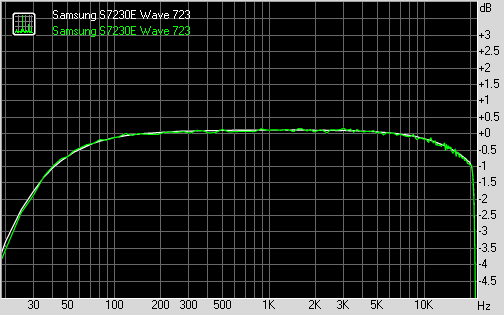