Shooting in broad daylight is quite common and the easiest scenario for any digital cameras as there's plenty of light. The Samsung Galaxy S6 has a wider aperture, f/1.9 versus the f/2.2 of its three opponents, but that's not going to help its case in good light.

Before we start, we should check out the Field of View (FoV) for each camera - that determines how much of the scene fits into the frame. Also, given the equal resolutions, the camera with the smaller FoV has an advantage in detail as you have less of a scene to capture with the same number of pixels.

The Samsung Galaxy S6 is the widest in this respect, while the Galaxy S5 and Note 4 are virtually equal. The Apple iPhone 6 captures the least horizontally, but due to its 4:3 sensor it captures more vertically. 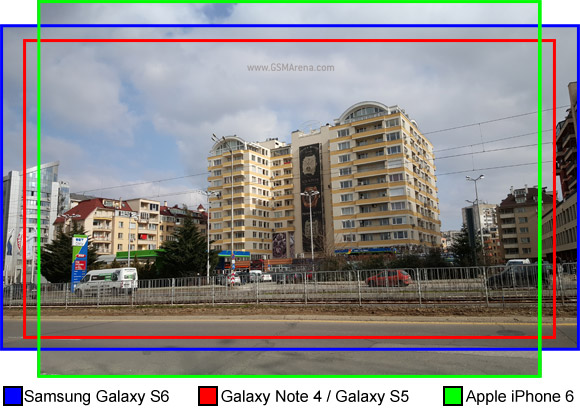 The Galaxy S6 photos have the least noise of the four, however they are slightly softer than Galaxy Note 4 photos, which other than that seems to be the best of the bunch. Part of that is because Samsung dialed back the processing strength for the S6 and the results are more pleasing when viewed at 100%, but they turn out softer.

The Galaxy S5 overdoes it a bit with the sharpening and photos look noisier. The Apple iPhone 6 is behind in resolution, but it's not just the number of pixels - the image itself is softer. 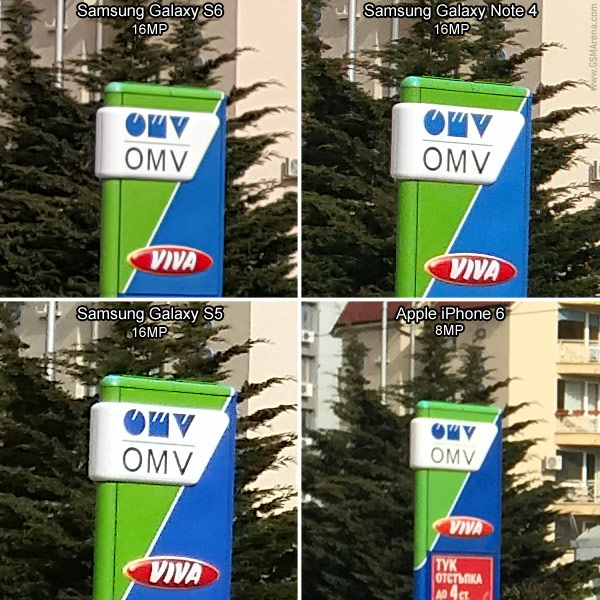 Moving on to our second crop, the Samsung Galaxy S6 is again a little softer than the Galaxy Note 4 image, but it managed to capture more of the concrete and stucco texture on the wall. The Galaxy S5 photo is comparable to that of the Note 4, but it took stronger sharpening to get there. The iPhone resolves the least amount of detail, the stucco texture in particular is gone almost entirely. 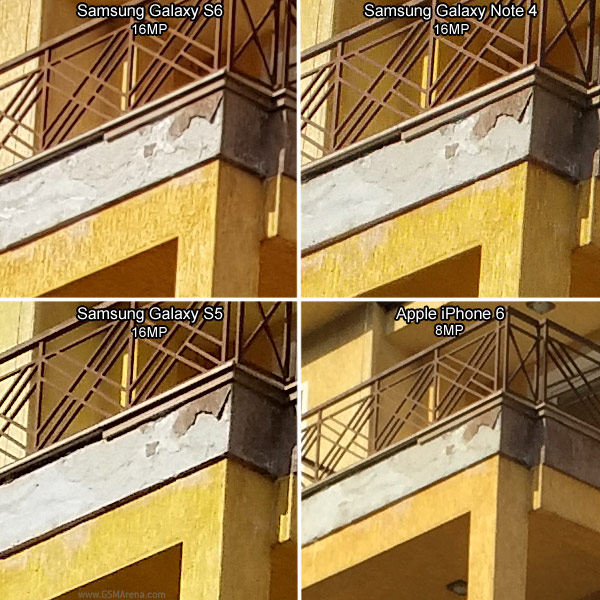 Here's a close-up of thin, black wires against bright sky. That's the worst case scenario for software sharpening and creates the most visible halos. We upscaled each image 5 times using nearest neighbor interpolation to make the differences clearer.

From this the amount of sharpening each camera applies becomes more evident than ever - in the Galaxy S5 it's dialed high up, while the Galaxy Note 4 is moderate. The Galaxy S6 and iPhone 6 use it only sparingly, hardly noticeable until you go beyond 100% magnification.

Pro tip: Pay attention to the white halos that follow the black lines - these are the sharpening artifacts. 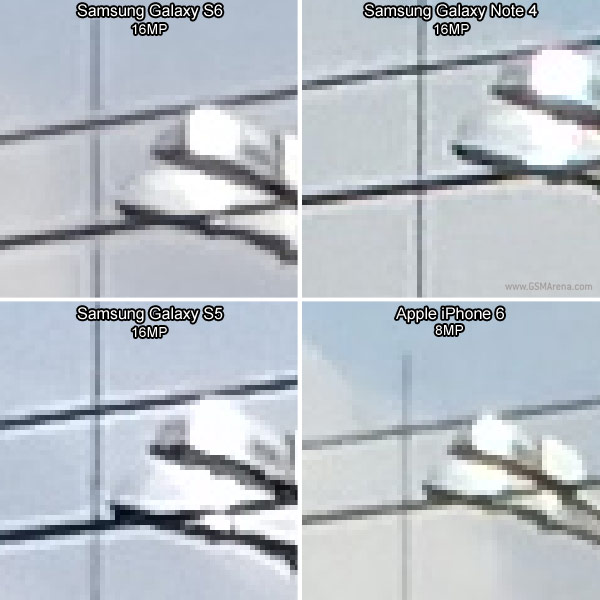 The Galaxy Note 4 level of sharpening can actually be the preferable way to go can actually be better than what the Galaxy S6 and iPhone 6 do in some cases. When viewing photos on a screen, they are almost always downscaled to fit the resolution - an HDTV has a 2.1MP resolution while a 4K UHD is at 8.3MP.

When you view the images on any of these screens, the oversharpening halos are no longer visible and you're left with a sharp-looking image, while the more natural Galaxy S6 and iPhone 6 will look even softer. You can sharpen them yourself, of course, but if you just want to snap a photo and share it, then some amount of sharpening is necessary.

In our blind test people noticed that the square pattern on the red rug is missing in the Samsung Galaxy S6 photo. The iPhone 6 doesn't render it properly either, also it shows it as orange instead of the actual red. Both the Galaxy Note 4 and the Galaxy S5 do render the squares properly.

The Galaxy S5 and iPhone 6 have problems with the green color. The drainage pipes on the green roof start to blend in with the roof itself, while the Galaxy S6 and Galaxy Note 4 keep them separate.

Pro tip: Take a look at how the rectangles on the red towel on the balcony are rendered. Also notice the greens are rendered identically, except for the iPhone 6. 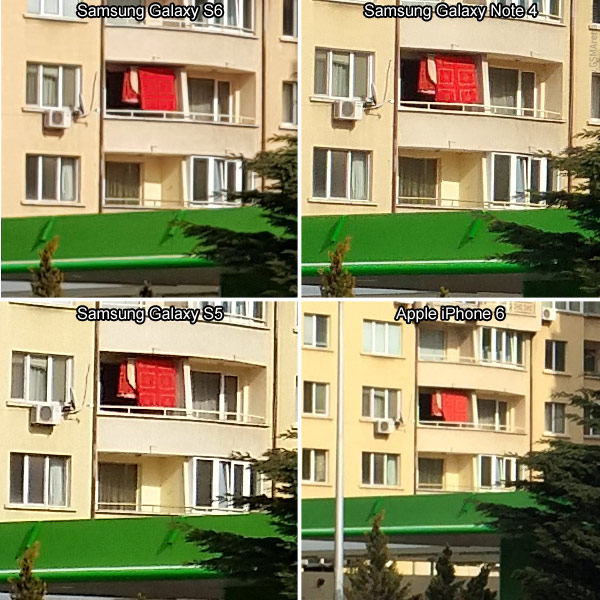