All three Galaxys can record 2160p video and the battle here is for prestige. 1080p videos are still easier to share so for most people victory here might be more important. Also, our fourth contestant, the iPhone 6, can't shoot 2160p video at all.

We'll start off with a comparison of the higher video resolution, the results between the three Galaxys being more evenly matched here. The Galaxy S6 dials up the sharpening while the Galaxy Note 4 actually turns it down for a change. Even so, the Note 4 videos capture more fine detail.

It helps that it has a narrower field of view than the Galaxy S6 though so you can fit less in the frame. The Galaxy S5 has the same FoV as the Note 4 and it doesn't pull any punches either. It manages to resolve slightly more detail than its successor in some places.

The Galaxy S6 offers a better dynamic range and preserves the highlights, which keeps more detail in brighter areas. You can see it in the rectangular lines of the blue and grey building on the left - the lines melt away where the sun's reflection is too bright.

As before, the image processing on the Galaxy S6 removes the squares on the red rug, but the green drainage pipes are more clearly defined. The Galaxy S5 in particular masks the pipes almost completely probably owing s to its poorer noise reduction algorithms. 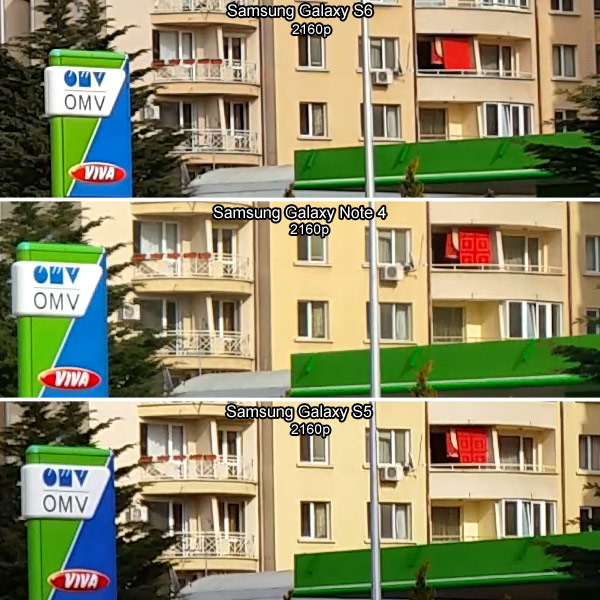 Here are the 2160p videos we used to make the crops:

And here's a comparison of the fields of view for the three Galaxy phones. The Galaxy S5 and Note 4 came out practically equal, while the Galaxy S6 is wider. 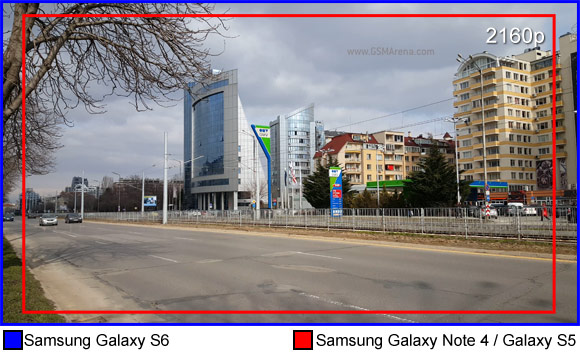 The processing changes for 1080p videos, the Galaxy S6 goes from the widest FoV of the three Galaxys to the narrowest (the Galaxy Note 4 and S5 again being equal). The Apple iPhone is the narrowest of the four, which means it fits less of the scene can dedicate more pixels to each object. 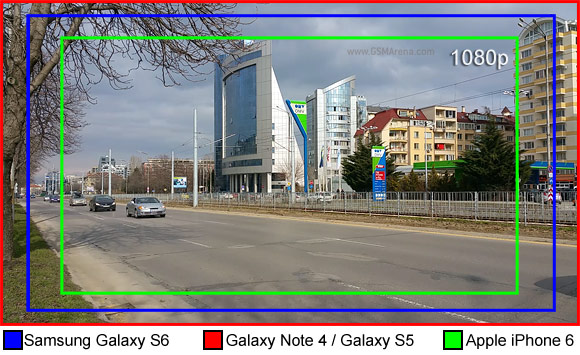 The FoV change was the first sign that processing has changed. Looking at the red rug again, it disappears from the Galaxy S5 video leaving the Note 4 as the only phone that captures the squares. They aren't present in the iPhone 6 video (the red is still too orange), but at least it did a good job of resolving the green roof drainage pipes.

The change in processing has the Galaxy S6 overexposing the bright areas, while still under developing the shadows. The Galaxy S5 left shadowy areas entirely too dark, while the Galaxy Note 4 and the iPhone 6 found a good balance.

Samsung Galaxy Note 4 videos are the sharpest (despite the widest FoV, but in part thanks to software sharpening) and are rich in detail. The iPhone 6 is very competitive and rivals the Note 4 without resorting to sharpening, but the narrower FoV sure helps it make up the difference.

The Galaxy S6 sits in the middle in terms of FoV. The sharpening of the 2160p videos is gone and frames have the slight softness typical of the still camera. The Galaxy S5 lead foot approach to sharpening is noticeable here as well, but it also captures some more detail than the Galaxy S6. The shadows are too dark and that removes the detail from a big part of the image. 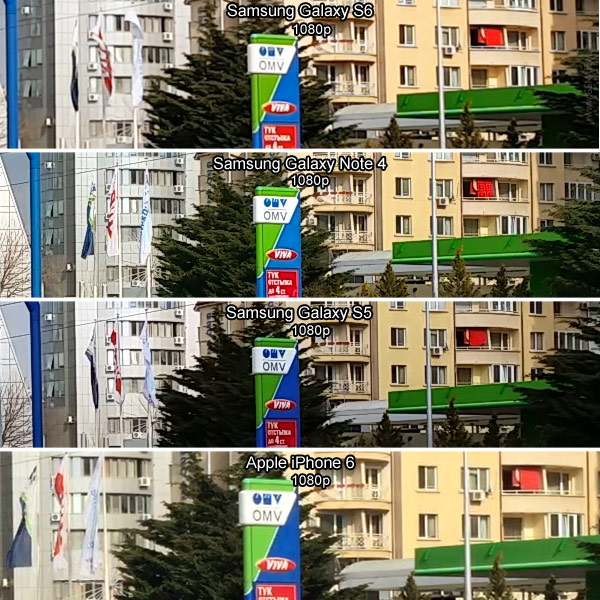 Here are the 1080p videos we used to make the crops:

Keep this in mind since neither the Galaxy S6 nor the iPhone 6 have expandable storage. Also, all phones apply a time limit on 2160p video - it's up to 5 minutes. That's reasonable, considering a 5 minute clip will eat up 1.8GB.

Image quality is only part of what makes a video good, the other part of the equation is audio. The three Samsungs record stereo sound at the generous 256Kbps bitrate (48kHz sampling rate), while Apple is yet to update the iPhone's audio capture - currently it stands at a lowly 64Kbps mono (44.1kHz).

Have a listen to the videos. In the ones from the Galaxy trio you can clearly hear cars as they cruise past and you get the positional information from stereo. In iPhone 6 videos sounds merge together and you can't tell which way the cars are going just by listening.