The Nokia Lumia 1020 has a distinct advantage over the competition when it comes to zooming, due to its lossless optical zoom at up to 4x magnification. The Samsung Galaxy Note 3 also offers lossless zoom but only until you reach about 2x under 1080p. The Galaxy Note 3 will let you go up to 4x, but its quality-reducing digital zoom after that point.

We've decided to see how the two zoom levels stack up against one another. Check it out:

As you'll notice, the end result is largely the same, which is very impressive considering that at full zoom the Note 3 is relying on digital zoom rather than optics.

Several of our tested devices offer the ability to record slow motion video, i.e. video recorded at higher frames per second than the industry standard 30fps.

We mentioned the HTC One's ability to record in 120fps at 768 x 432 pixels, but the low resolution produces results that are far from stellar to say the least. The iPhone 5s also capable of slow motion video, except at a more acceptable 720p resolution which produces significantly better videos.

The Samsung Galaxy Note 3 and LG G2 are both capable of 1080p video at 60fps, which both manufacturers intend as videos with smoother motion. You can achieve a slow motion effect similar to the one found in the above iPhone 5s sample by playing it at 30fps.

1080p@60fps is an impressive feat, but it does come at a price. In both devices you'll see a significant amount of degradation when the framerate gets doubled to 60fps. Since no video upload service is able to support 60fps uploads at the moment, the following crops will have to illustrate our point. 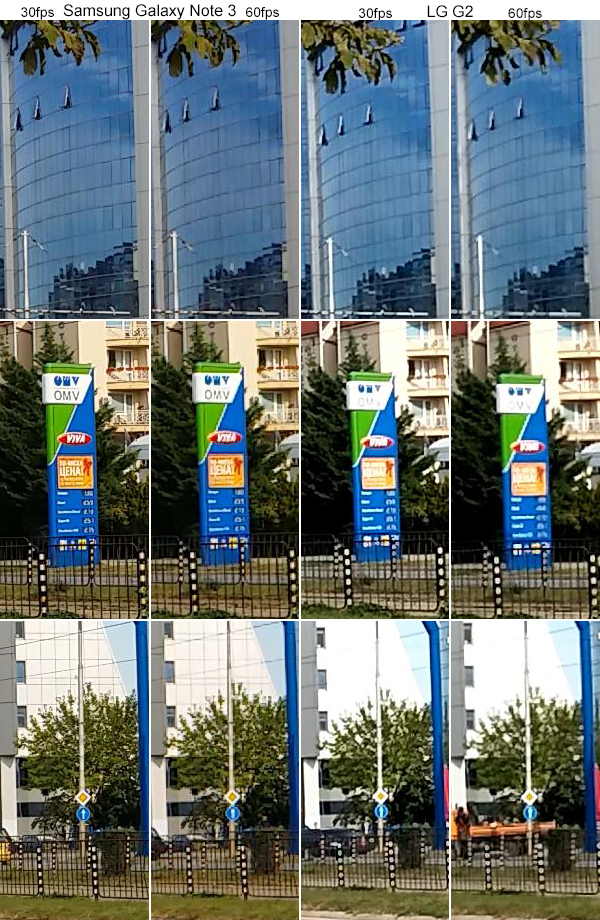