The iPad Pro comes in your Apple-standard plain white retail box. Barely larger than the tablet itself, the box contains a 2.4A AC adapter and a 2-meter-long USB-to-lightning cable.

The iPad Pro is your regular iPad, only larger. Okay, actually a lot larger. The idea was that the iPad Pro should be as wide as the iPad Air 2 is tall - in terms of display size and resolution, that is. Obviously, bezel placement means that the physical height of the "tiny" 9.7-inch Air 2 exceeds the Pro's dimension along the X axis.

The iPad Pro measures 305.7 x 220.6 x 6.9mm, which is about a centimeter more in both directions, compared to an A4 sheet of paper (a little narrower and taller than the Letter format). As such, it's actually smaller than an A4 clipboard, which is a nice way to put its dimensions in perspective.

It's not really as light as a clipboard though, at 713g for the Wi-Fi version and 723g for the cellular variant. That said, it weighs some 50g less than a competing Surface Pro 4, but that one has a kickstand built in. 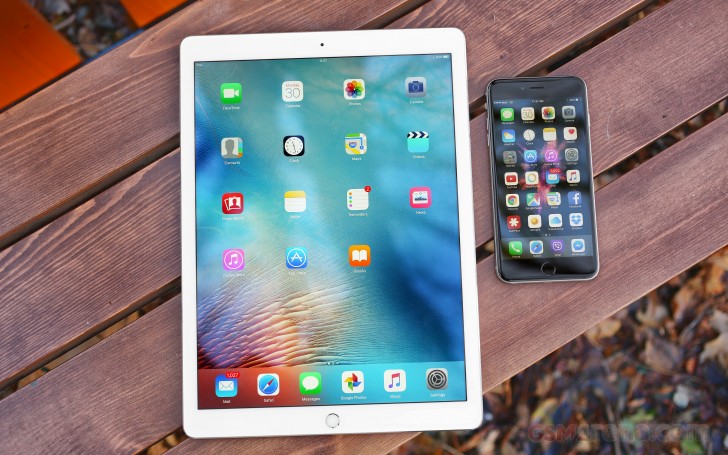 So, conceptually the iPad Pro carries all the familiar traits of the lineup, only on a different scale. The display is obviously bigger, but bezels have remained mostly unchanged, compared to the Air 2. Top and bottom, they're the same, the side ones are marginally wider to allow for more grip area, presumably.

There's little of note on the face of the device - it's as minimalist as the entire range of iPads. You have the front-facing camera centered above the display and the TouchID home button on the bottom.

Front of the device

The back has the same brushed metal finish as Apple's entire recent range of devices, a Silver color option in our case. It gets a proportionately bigger fruit logo (still not lit, sorry), iPad branding and the mandatory certifications. The camera hasn't moved from its customary position in the top left corner either, a mic next to it.

On the right side high up is the volume rocker, again, as on any other iPad, with another mic pinhole.

Volume rocker on the right

On the left, you'll spot the three-pin connector for the Smart Keyboard dock. This one is positioned in the center to power the keyboard and get input from it.

The power button is in the right corner at the top - similar to the rest of the iPads. On the very far end is the 3.5mm jack.

What's unlike any other iPad is the number and placement of the speakers. The iPad Pro has a total of four of those, positioned on either end of the top and bottom. The grilles for either of them are familiar, but in this case each consists of nine holes. Yes, not 14 as on the iPad Air 2, and not 8 as on the iPhone 6 Plus/6s Plus.

Such minute details aside, the four speakers promise loud sound and guarantee that however you're holding the slate, you'd be left with at least two of them unobstructed by your palms.

The Lightning connector is right in the middle on the bottom, exactly where you'd expect to find it.

A very important subject with such an unwieldy slate, handling the iPad Pro is a two-handed affair. Holding the iPad Pro with just one hand poses all sorts of problems. For one, it's heavy. In landscape you have the larger top or bottom bezel to hold on to with your thumb, but then the center of gravity of the tablet is far enough to put some serious stress on the said digit. 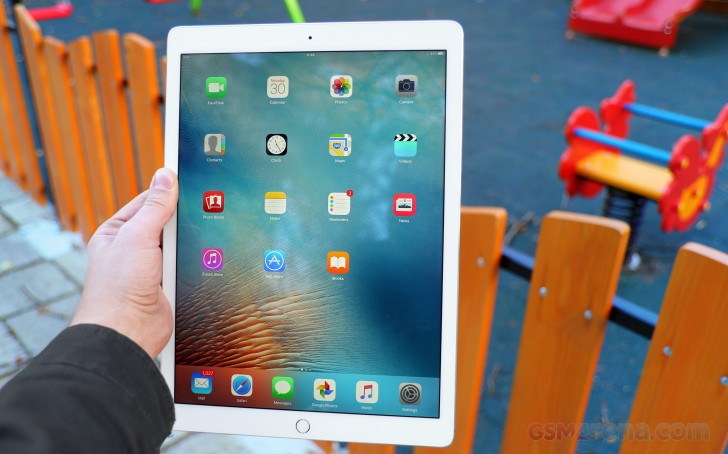 Rotate into portrait and the center of gravity comes a lot closer, but the side bezels don't give you enough room to hang on to, without touching the display. Now, the software does work well to interpret what's a tap and what's your thumb doing the balancing, but either way, it's right there blocking the view.

You could also place the slate on your palm entirely without holding on to the front, but the finish of the back is slippery enough that you wouldn't want to.

What certainly helps handling in general is that the iPad Pro is thin. Okay, it's not iPad Air-thin, but the 6.9mm do help offset some of the weight and footprint disadvantages.

We don't have a standardized bending test rig, nor do we consider such exercises entirely justified. That said, the iPad Pro feels solid and positively not prone to bending under its intended usage scenarios.