The video cameras of both the iPhone 5 and Galaxy S III top out at 1080p@30fps video capture, but one of the major differences between the two is that this is the only recording option the Apple phone offers, while the S III will do 720p and go all the way down to QVGA over three more steps (this lets you trade image quality for storage).

Both phones shoot at a bitrate of 17Mbps, making for a smooth frame rate of 30fps. However the Galaxy S III captures stereo, while the iPhone 5 (despite having three microphones) does mono recording. The image quality is similar, but there are important differences.

The most visible one is the field of view - the Samsung Galaxy S III manages to capture more of the scene, so you can fit more people in one shot, for example.

However, because there's more content for the same number of pixels, the Galaxy S III is at a bit of a disadvantage, but both cameras offer excellent image quality. 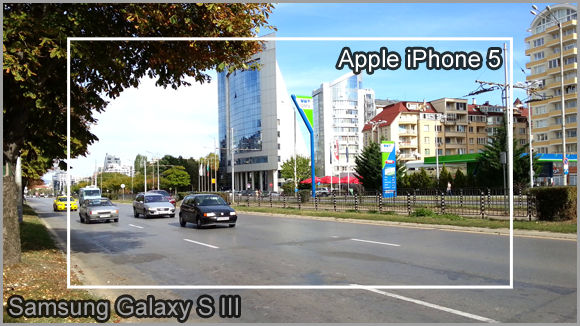 Another thing that became immediately obvious is that the iPhone 5 is better at picking workable image settings automatically - we shot both videos without touching any settings and the Galaxy S III overexposed and blew out some of the highlights. So, for best results with the S III, you might have to fiddle with the exposure compensation before you start shooting. 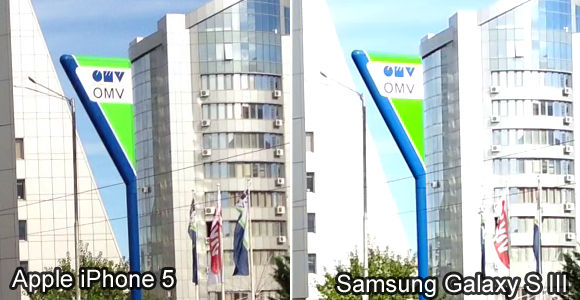 Here are the samples we shot for this comparison. Don't forget to pick 1080p and view them in full screen.

Again, pixel peepers can head to the Video quality compare too to get a better look. We frame the test shots there to fit the exact same parts of the scenes, which takes out the different FoV out of the equation.

The iPhone 5 offers AF/AE lock, which can be great in dynamic scenes where the autofocus and auto exposure would get confused. On the Galaxy S III you can lock the focus, but not the auto-exposure.

One option that both phones have is video stabilization. We put the two on a stand and shot video simultaneously on both to see which one did a better job of smoothing out hand shake.

While it didn't look like it on the phone screens while we were shooting, the iPhone 5 did a better job. The result is not perfect but smooth enough, while the Galaxy S III produced jerky videos. It's especially visible during panning, the phone is so keen to keep the video pointed in the same direction that it fights the panning at first and then jumps to catch up when it can't compensate anymore.

It's exactly the video stabilization that saves the Apple iPhone 5 from defeat here. The narrower field of view and the mono sound were disappointing, but smartphone are rarely used with a tri-pod, so the ability to reduce the camera shake effect comes in welcome on more than one occasion.