Each phone managed to draw blood relatively early on, but the final score can't simply be based on which phone took home the most victories.

Price is an important consideration as well, on that front the Samsung Galaxy S6 seems to be leading, even if you have big storage requirements and go for the 128GB model. For that price you get the best screen, software focused on multitasking and security and a camera that works great in the dark.

The Sony Xperia Z5 is pricey, but gives you the freedom to use microSD cards as a cheap way to add more storage. It's ready for a trip outdoors or just lounging by the pool and during the day it captures impressive photos.

The Apple iPhone 6s is the most expensive, but also the only all-metal phone of the three. It brought some interesting UI features, amazing graphics performance and the camera impressed with its results (if not with its specs). 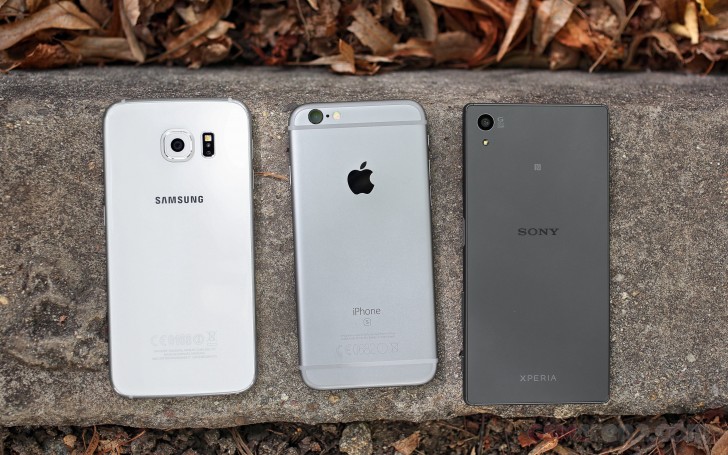 Even when money is no object, each of the three have unique strengths so it's not obvious which phone is the best. Say you want to listen to some music - the Galaxy S6 player is feature rich and the hardware puts out excellent audio quality, not to mention the ease of simply copy-pasting your music on the phone's memory.

The Xperia Z5 has the same set of software features with stereo speakers on top. But the audio quality for headphones isn't as good. Then again, with the right (pricey) headset you get digital noise cancellation, which works quite well. And the iPhone gets the most love from accessory makers (it owns the best-known one) and courts musicians for exclusives. See? It's a complicated question to answer even when we're just talking music.

Finding the best phone is akin to a personality quiz. The Apple iPhone 6s has a mature classiness to it, it's elegant without being showy. Things like 3D Touch allows you to interact with apps without the workaholic's dream of split-screen multitasking. The camera produces impressive results in its default and only mode, the videos, panoramas and Live Photos turn out great.

The Samsung Galaxy S6 is "new money" so to speak, Galaxy S used to be utilitarian until the S6 changed majors to high fashion. Some software and hardware features were dropped in an effort to turn it from a geek's dream to a businessman's dream. The Galaxy S6 excels at multitasking and functionality straight out of the box and its camera is strongly geared towards low-light shooting. The multimedia suit is great too.

The Sony Xperia Z5 lost some of its perceived ruggedness when its parent company warned against using it for underwater photography. Sony's focus this generation was solely on the camera as it's the only major update over the Xperia Z3+ (outside the fingerprint sensor). And the camera did great on a bright sunny day, what it found hard was shooting in the dark. Still, as the only phone with waterproofing, stereo speakers and a microSD slot, it is a highly versatile and practical choice.

The iPhone 6s and Galaxy S6 are bound to attract the most customers (at least in the 5" size class), but popularity is not the same as quality. Still, Sony's struggle to return to popularity isn't helped by minor, incremental updates.

In the end the choice of phone probably depends on the phone you have right now. Most people will just get the 2015 version of the phone they own, but what can change the status quo is those who are disgruntled or just tired - of Apple's walled garden, of Samsung's desire to stand apart from other Androids, of Sony's reluctance to break the mold, whatever your gripe may be. Whatever you choose, do chime in the comments to let us know.