While the three cameras differ quite a bit in total camera resolution, it turns out they are very easy to compare.

The Sony Xperia Z5 has a big resolution advantage, but with a super wide 24mm field of view (FOV) its photos are so wide that when viewed at 100%, objects have roughly the same size as in the other shots. The Samsung Galaxy S6 has a wider FoV, but that's because it shoots 16:9 photos. If you put it in 4:3 mode it drops to 12MP, and the FoV becomes comparable.

This puts the phones on equal footing - everything in the scene is drawn with the same number of pixels, so it's down to the quality of those pixels. Processing also plays a huge role as we're about to see.

Here's a quick illustration of the difference in Field of View. The Sony Xperia Z5 can capture a lot more than the others. You can switch it to 16:9 mode and thanks to Sony's multi-aspect sensor you will actually gain some ground horizontally (at the cost at vertical coverage). 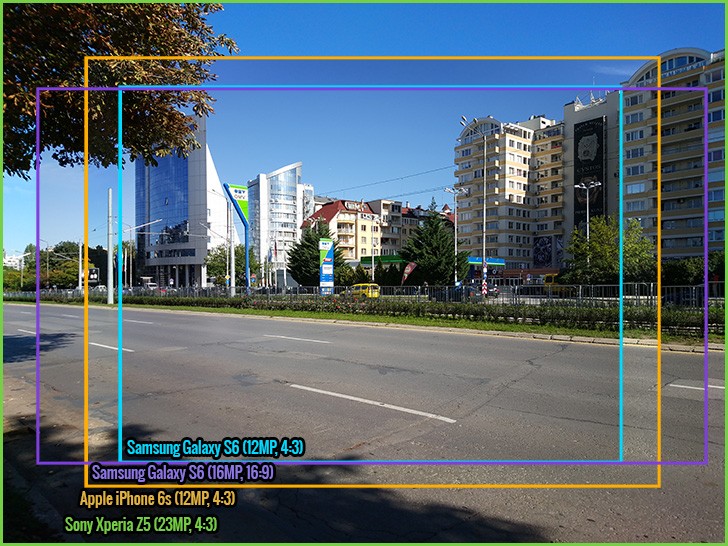 The Samsung Galaxy S6 camera is fairly wide horizontally (its sensor is 16:9 natively), but lacks vertical coverage. The Apple iPhone 6s camera has an old-school 4:3 sensor and manages to capture a bit more than the Galaxy in 4:3 mode, but it's not as you can fit as much horizontally if the Galaxy uses its full sensor.

One thing to note here is that Xperia Z5 suffers from edge softness. Basically, the quality degrades when you get far from the center, the very edges of the photo can be particularly messy. So it captures more of the scene, but don't place objects of interest at the edge of the frame as you'll lose detail there.

The Sony Xperia Z5 produced the sharpest photos, but also the ones that show the most signs of over-sharpening. The noise reduction isn't great, leaving noise that gets sharpened afterwards, causing some noticeable artifacts when you view the photo at 100%. Most of the time, however, when you view the photos at a lower resolution, they look great.

The Samsung Galaxy S6 comes second in sharpness, its photos don't have that processed look of the Xperia shots, but they are noticeably softer too. Just look at the trees, the text, the grey roof tiles. A curious experiment we undertook, we sharpened heavily the Galaxy S6 images and they actually came out looking exactly as the images by the Xperia Z5. So the look of the images is actually a conscious choice by the engineers who've produced these cameras and it would be up to you to decide whether you'd like a softer, more natural image or a sharper image with lots of sharpening artefacts and visible digital noise.

The Apple iPhone 6s shots were actually the softest of the bunch. If you look at the black wire though you'll see there's almost no sharpening halo. Apple's processing leans more on noise-reduction than on sharpening (the exact opposite of Sony's) and that does take away from fine detail in the trees.

In terms of colors, the Apple and Sony phones nailed the white balance, while the Samsung is ever so slightly on the cool side. Color-wise, the iPhone 6s does great for greens and blues, though the red looks a bit pale. The Sony messes up all three primary colors, while the Samsung does okay on all three without getting them just right.

Even in the previous crop you can see how each phone handles sun-bleached areas and deep shadows. We took a photo specifically to test the dynamic range. We shot in the default camera mode with no adjustments and HDR disabled. For the Xperia Z5 we used Superior Auto, which is slightly unfair to the others as on previous Z flagships Sony's intelligent mode would activate HDR when needed.

We don't think that it did turn on HDR mode in this case, even though it needed it - and badly at that. This photo captures the dark shadow cast by a tall building along with banners that directly face the sun, a worst case scenario for a camera.

While exposing the light part of the image correctly, the shadows on the Sony Xperia Z5 photo came out so dark that you can't actually see the trees in the garden and most of the detail in the traffic signs is lost. The histogram shows that the software kept the darks above the minimum, but that didn't help.

Something you may have already noticed is that the Xperia just doesn't handle shadows well. Even when they are properly exposed, there's much more noise and much less detail in them than in the rest of the frame. Just look at the shadowy areas of buildings. This is going to be a real problem in the low-light test.

The Apple iPhone 6s is surprisingly the winner here and pulled off a better dynamic range than Sony or Samsung. It managed to preserve some detail in the shade while exposing the highlights correctly.

The Samsung Galaxy S6 bumped up against both the lower and higher ends of its dynamic range (clearly shown in the histogram). It still kept some detail in the shadows though, unlike the Xperia.

Tie: Samsung Galaxy S6 and Sony Xperia Z5. It's a choice between a softer, more natural image or a sharper image with lots of sharpening artefacts and visible digital noise. If you prefer it, the S6 can get there with extra sharpening in post-processing. The Xperia Z5 has a wider FOV but corner softness is severely pronounced, while the Galaxy S6 photos are sharp from edge to edge and have a similar horizontal FOV. The Xperia Z5 dynamic range is also less than stellar so in the end, despite its high-resolution sensor, we couldn't whole-heartedly give it the top spot in the daylight photography.

The Apple iPhone 6s photos looked the softest and the 4:3 sensor feels out of place in the widescreen era. It showed impressive dynamic range though and photos are processed with a light touch, so no processing artifacts stick out at you when you zoom in to 100%. It's also got the widest dynamic range of the three.