Smartphone photography is a complex mix of hardware, innovation and software. These three companies are caught in a game of one-upmanship, so each year consumers get a baggy of cool new (some gimmicky) tricks.

Let's start with the hardware. The Sony Xperia Z5 has the largest sensor, 1/2.3", and the second widest aperture, f/2.0. The Samsung Galaxy S6 claims the reverse - the widest aperture, f/1.9, and the second biggest sensor, 1/2.5". Apple is third in both categories and doesn't care, previous iPhones weren't technologically superior either, but were some of the best cameras around. 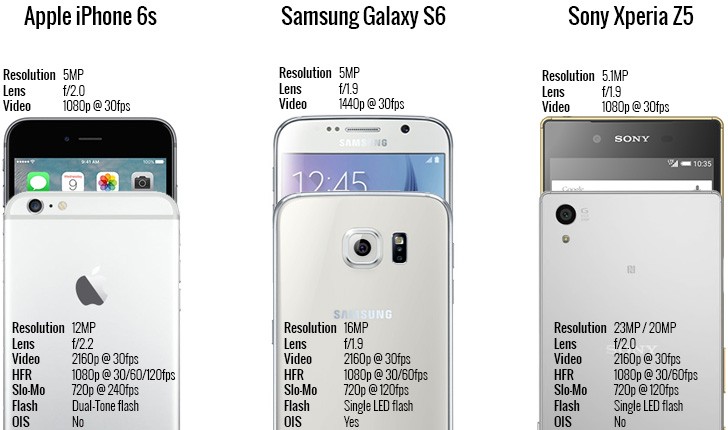 Sony boasts that its camera can get a focus lock in just 0.03s under perfect conditions. This is thanks to a hybrid phase detection AF system. Now phase detection was pioneered on smartphones by Samsung, and also Apple use it too. So rest assured, all three contenders make use of it already.

Sony also brags about Super Resolution, which offers up to 5x digital zoom and produces an 8MP photo from the 23MP sensor. Sony also claims that if you shot in 8MP resolution in Superior Auto mode, the camera will oversample the images, meaning that it will use the whole sensor for snapping those 8MP shots (how very PureView). Oversampling has many benefits, one of which is reduced noise.

Then there's the latest generation Steady Shot, which will stabilize 1080p videos electronically (2160p videos don't get this treatment).

PureView flashbacks continue with the hybrid sensor. It is almost equally as good as taking 4:3 photos as it is 16:9 photos. They come out with 23MP and 20MP resolution respectively. The Galaxy and the iPhone meanwhile are locked to 16:9 and 4:3 respectively. Switching to the other aspect ratio is rather costly in terms of megapixels.

The Samsung Galaxy S6 has electronic stabilization too, but it has optical image stabilization too. This can be used for photos as well as videos, which will improve low-light shooting even further (as if the f/1.9 aperture wasn't enough).

Apple advanced past the 8MP resolution it has been using since the 4S and went with 12MP. Not very impressive by Android standards. The new addition is Live Photos, an HTC Zoe like feature that records 3 seconds of video when you press the shutter speed (starting 1.5s before you press the shutter).

Apple also upped their video game, the iPhone 6s generation is the first that can record 2160p video. The camera offers more modes than the Androids too, with 1080p videos at 30fps, 60fps and even 120fps.