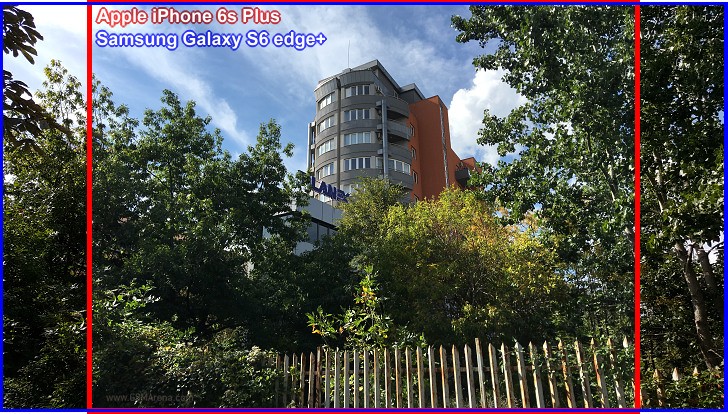 The higher resolution is easy to see in the level of captured detail - the STOP sign is clearly legible in the Galaxy S6 edge+ photo and the foliage looks better. The bars on the bottom picture are better resolved, there is less noise and less to none compression traces.

This crop also makes it easier to compare color rendering - the iPhone 6s Plus has a blue-ish tint, while the Samsung has a slight yellow overcast. The warmer colors on the Galaxy S6 edge+ are somewhat closer to the reality than the iPhone 6s Plus, yet this is a rather personal taste, so we can't easily rule for either of the phones. 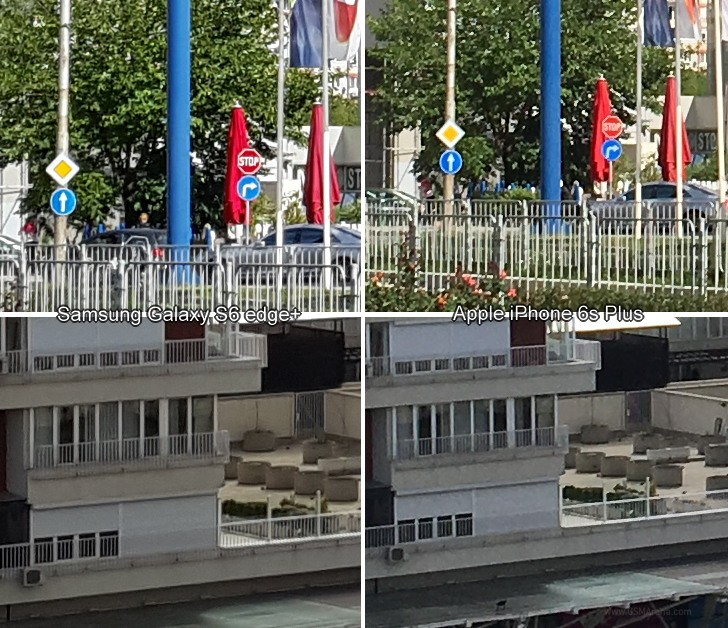 And here is another crop to illustrate the better foliage and the more detail on the Galaxy S6 edge+ images.

Both cameras keep noise down, though the Galaxy has a better success. Both snappers offer excellent dynamic range though and we found ourselves barely using the auto or manual HDR option.

And here are two 5MP selfie shots taken with the front cameras. While nothing impressive, the Galaxy S6 edge+ front camera is wider, resolves more detail and the colors and contrast are slightly better.

5MP selfies with the iPhone and the Galaxy

We also snapped some low-light selfies with both devices. If the so-called Retina flash is turned on, the iPhone 6s Plus succeeds in resolving more detail and produces less noise. The backgrounds go darker with the Retina flash, but that's to be expected. It seems Apple was right to use the screen as a flash, as it indeed helps to improve the overall quality.

Winner: Samsung Galaxy S6 edge+. A 16:9 camera is a better match for modern screens (phones, tablets, laptops, TVs, almost everything is widescreen), but more importantly the Galaxy S6 edge+ photos offer a significant advantage when it comes to resolved detail and less noise.

The Apple iPhone 6s Plus takes good-looking photos, but it loses on the most important factor (resolved detail) and offers no tangible advantage in other aspects.

Dynamic range is another important quality of a good photo and we've already established both devices offer great dynamic range. Still, if you need to use HDR the Apple iPhone 6s Plus photos are a lot noisier and darker, though they manage to extract more detail in the shadows than the regular photos.

The Galaxy S6 edge+ manages to resolve more detail in both the highlights and the shadows, the noise levels are kept low as well. The images are brighter, with better contrast and exposure. 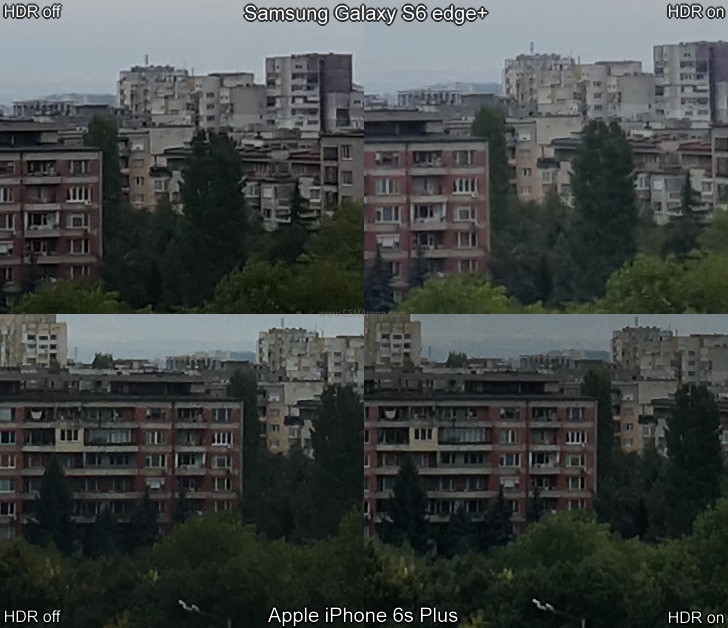 Check the full resolution samples below.

The iPhone 6s Plus, thanks to the bigger sensor, offers even bigger panoramic images. Those still cover about 180-degrees, but now they can go up to 15,000 x 4,000 pixels or 60MP. The stitching is great, there are no artefacts, the dynamic range is amazing, and the color rendering is good, too.

The Samsung Galaxy S6 edge+ shoots panoramas with very high resolution - 3,200px tall if you hold the phone upright, 1,800px if you hold it on its side. The software and the fast chipset make shooting very simple, you just start panning in one direction. The 360-degrees panoramic images are also up to 60MP resolution at about 19,200 x 3,100 pixels.

Both phones produce amazing panoramic shots, the best you can find on the market. The iPhone's samples are noisier and smoother, while the Galaxy makes them sharper and with less noise. The dynamic range is superb on both sides, as are the colors and contrast.

Winner: Tie. The iPhone 6s Plus is limited to 'just' 180-degree pano shots, but those are the same resolution the Galaxy S6 edge+ needs to render a 360-degree pano. The Galaxy though offers slightly better detail and less noise. Finally, the iPhone 6s Plus offers a whisker better dynamic range over the otherwise great S6 edge+.