Most photos are taken during the day, but the mark of a great camera is low-light performance. Phones are typically at a disadvantage here with their small sensors and weak flashes, but that's not the case with some of our contestants.

We broke this challenge down in two, depending on whether flash was used. Sometimes you just can't use flash, for example, if your subject is too far away - and as saw in the shootout, "too far away" is not all that far from some phones.

Here are the crops we made from the best and worst photos we took with each phone. This image shows the results for both cases - flash off and on - to demonstrate what kind of difference flash makes (or fails to make). The worst shot shows how consistent a phone is, that is, can you snap just one photo with it and count on it being as good as possible. 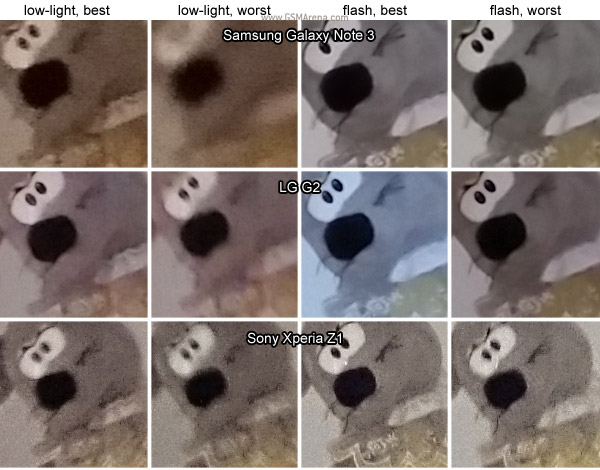 The Samsung Galaxy Note 3 had quite a hard time in this test - a large portion of the shots we took turned out blurry beyond usable and even when we picked out the best shot it was nothing spectacular - leftover noise even after heavy noise reduction that takes away most of the detail doesn't make for a great photo.

The LG G2 has OIS, but it drops the shutter speed too much and shakiness still manages to sneak in - the worst shot is noticeably shakier than the best one. Photos don't have a lot of noise, but that's due to aggressive noise reduction, which takes its toll on fine detail too.

The Sony Xperia Z1 has the advantage of downscaling its shots - we used Superior Auto for this test. However, rven that left the low-light photos quite noisy, and lacking in detail.

The strong flash saw the Samsung Galaxy Note 3 push up from the bottom and the camera produced decent, consistent results.

The LG G2 flash didn't help a lot. There was next to no difference when we enabled it, except for a tiny bit of extra detail and the smartphone slid down the ranks. Things aren't as well defined as on the Note 3's photo, making the LG G2 the worst performer in this test. On one occasion the photo had a strong blue tint, though, and as luck would have it that was the best shot with the most detail.

The Sony Xperia Z1 flash is not particularly powerful and turning it on helped more detail come through but there was still a lot of noise in the shot.

The LG G2 and the Samsung Galaxy Note 3 both have a spherical panorama option, but since all three phones have sweep panorama we'll compare that instead.

The Samsung Galaxy Note 3 produced a panorama with a whopping 60MP resolution with tons of detail and very little stitching artifacts (the tiles on the ground get a little messed up and so does a moving car).

The LG G2 panorama is reasonably wide and the stitching looks okay, though the 6MP resolution is unbecoming of a 13MP camera and a Snapdragon 800 chipset. The biggest issue is the exposure - the phone just didn't do a good job of handling the transition from the shade behind the mall and the bright, sunlit areas.

The Sony Xperia Z1 is finicky with panos - your panning shouldn't be too slow, but not too fast either - and it achieved the lowest resolution of the bunch, 5MP (from a 20.7MP camera and with a Snapdragon 800 doing the math, it's just poorly written software). The panorama is full of ghosting artifacts too. At least objects are roughly where they belong.