Camera features fall into two categories - hardware and software features. The base is the hardware - sensor size, megapixel count, aperture size - those determine the potential of a camera. Software features are the ones that determine the level of control, ease of use, and post-processing, which is just about as important to the user experience as the hardware side of things.

Keep in mind that the three smartphones here took part in our six-way camera and video shootout, which you should check out if you wan to know where they stand among the other cameraphones on the market.

Looking at the hardware aspect, the Sony Xperia Z1 has the clear edge. While the LG G2 and Galaxy Note 3 utilize the standard 1/3.0" sensor size, Sony has gone with a much bigger 1/2.3" sensor, which is more commonly found in point and shoot cameras and roughly has a 70% bigger area than the others.

Then there's the aperture size - a wider f/2.0 aperture means more light comes in, which could translate into better low-light images, which could give the Xperia Z1 the edge as well.

Then there's optical image stabilization. Only the LG G2 has it, while the other two rely on software solutions, which don't do a particularly good job.

The OIS will help a bit with low-light photography, but without a doubt, it's more advantageous in video capturing, keeping the videos shake-free. For photos in poor lighting, a strong flash is what is needed (a wide aperture and large sensor help too).

Now let's look at the field of view. The Samsung Galaxy Note 3 lens is narrowest, followed by the LG G2 and finally, the Xperia Z1 with the widest. 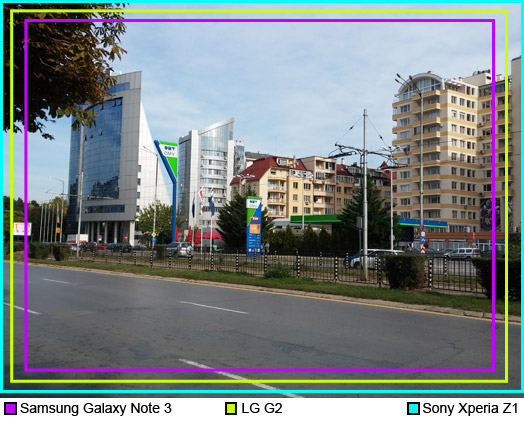 Then there's the panorama - all three phones can do it, but the South Koreans (LG G2 and Samsung Galaxy Note 3) can do spherical panoramas, too (think Photo Spheres and Google Street View).

Winner: LG G2. The LG G2 offers OIS as well as a wide variety of cool software tricks, giving it the win here.

Runner-up: The Xperia Z1. The Xperia Z1 has the biggest sensor and highest megapixel count, but its camera app is rather low on features.

Now let's look at the stats sheet for video recording.


The Samsung Galaxy Note 3 comes with the most impressive resume. It packs 2160p (or 4K) video recording with 2x lossless zoom and also has 1080p@60fps fast-motion and 720p@120fps slow motion recording to compliment the now-standard 1080p video at 30 fps. The LG G2 also has 30 and 60 fps 1080p video recording, while the Sony Xperia Z1 only features 30 fps FullHD recording, which puts it in last place, specs-wise.

The Samsung Galaxy Note 3 features the ever-evolving TouchWiz camera UI. Like many recent droids, it uses an integrated camcorder and camera interface that eliminates the need to toggle between the two. When switching to 4K mode, the Note 3 warns you that dual-shot and still images during recording would be disabled. The digital video stabilization would also be disabled, as shooting in 4K requires full use of the sensor and image chip.

LG also features an integrated camera/camcorder interface, but the G2 has a few more cool additions than its Korean counterpart from Samsung. Live Effect lets you alter the faces of people you're shooting in real time, although the resulting videos are only 480p. Tracking Zoom is a nifty feature that lets you selectively zoom into certain sections of the frame, letting you highlight important things while still showing the bigger picture. The best part is that you can relocate the preview window and zoomed-in section all while recording.

The Sony Xperia Z1 gives you the same manual controls interface for the camcorder as it does for the still image camera, including scene selections, white balance, exposure controls, and shooting modes but no cool effects.

Runner-up: LG G2. There's no 4K videos here, but the LG G2 at least does 1080p@60fps. It also offers Live effects, which is the coolest software feature we have here.

Third place: Sony Xperia Z1. The Sony Xperia Z1 video recording capabilities max out at 1080p@30fps, which is rather low in this kind of company.