It's the match of the season and the winner takes home the most coveted title. After successfully fending off the Apple iPhone 5s and the Nokia Lumia 1020 in the battle of the platforms, the LG G2 had to defend the title on its home Android turf. And was that exciting to watch - the Samsung Galaxy Note 3 and the Sony Xperia Z1 both spared no effort to try and knock the G2 off its high perch. 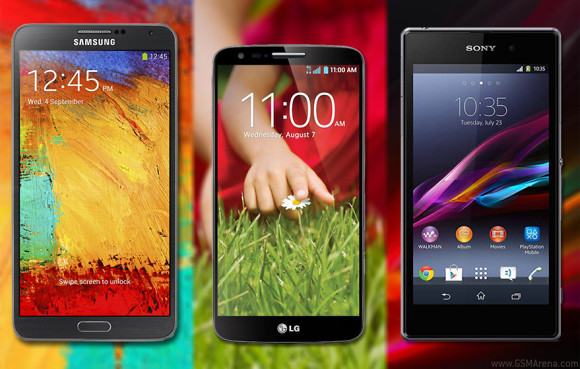 Each of our three contenders brought something different to the table. The LG flagship's most potent weapons are well familiar by now. It has the most forward-thinking design that contracts the bezels to a bare minimum. Then there's the 13MP camera with optical image stabilization and LG's highly-functional UI to round off an impressive package.

Samsung is confident its Galaxy Note 3 isn't too big to turn quickly and go for the title. It brings an outstanding 5.7" Super AMOLED screen and the mighty S Pen to offer unrivaled multitasking thanks to Samsung's proprietary Multi-Window feature and 3GB of RAM. The 13 MP camera may lack OIS, but debuts 4K video recording on a smartphone, while Android 4.3 Jelly Bean is the latest available.

The Sony Xperia Z1 bets on looks, protection against the elements and a camera sensor with both size and resolution the other two just cannot match. It could use a little polishing on the software side, but there's enough hardware muscle to win the fans over.

But the smartphone market is not a one-size-fits-all affair. If you are after the ultimately most capable droid and you don't mind the size, the Samsung Galaxy Note 3 is the most likely choice. Thanks to TouchWiz and the unique S Pen it offers an unmatched set of features. And that's not limited to the creative use of stylus or taking notes the old-fashioned way - the S Pen is made to count throughout the interface and takes multitasking to a whole new level.

There's no escaping the size thing though - the Galaxy Note 3 is just too big a device to fit in every pocket. Handling and pocketability don't get much better with a big-screen high-end smartphone than the G2, so if a phablet is a no-go, the LG flagship is a an alternative you'd certainly appreciate. This one should also be the choice of those who'd like to try something new - the innovative design with buttons on the back and the knock-to wake gesture show that LG wasn't afraid to experiment and most of it has worked out excellently.

Finally, users who value aesthetics and premium design will almost certainly pick the Sony Xperia Z1. The smartphone has the looks and high-end feel that few can match, let alone beat. The IP58 certification makes it the right device for those who enjoy adventure sports and outdoor activities - the Z1 isn't afraid to get its feet wet. And the already great camera clearly has the potential to be a star - Sony just needs to unlock it with a few software tweaks.

So there you have it - these three are the best of Android, and while they compete with each other for the top spot, their target groups are different enough. It's up to you to decide which feature set suits you best, because honestly, there just isn't a wrong pick here.

It's always a question of trade-offs and that would be entirely your call - whether you are after the biggest possible screen or the OIS-enabled camera, the water resistance, the still photography or the better camcorder - the choices are so many that it's nauseating to weigh everything up at once. But that's part of the fun when buying one of these amazing devices. Happy shopping!