We tried out several of the additional camera modes, starting with HDR. Again, we've downscaled the photos to 4MP to keep the same elements in the frame. 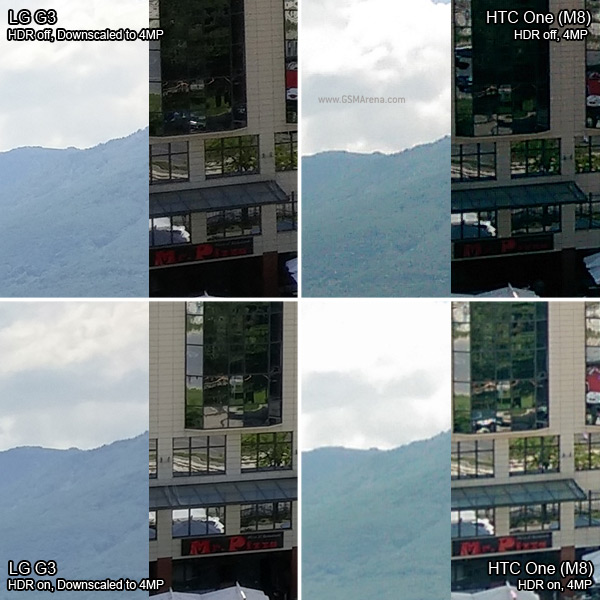 Here are the full size HDR on and off photos used for the crops:

We've mentioned the refocus and shallow depth of field effects, which are essentially the only weapon the One (M8) camera has. The problem is, it's not very accurate - you often get blurry halos around objects and areas are in or out of focus even though they shouldn't be.

You can tweak the strength of the effect, so we went for about half strength as at full strength the mistakes become all too obvious. Separating objects based on depth can also be done with a number of creative effects. Those aren't 100% accurate either.

The LG G3 can't do artistic effects but it does have an additional "All in focus" option. The DoF effect is generally very weak and not particularly accurate. The biggest problem we encountered is that we can't edit the image after we've shot another - with the HTC you can go back at any time, but LG's camera seems to discard the necessary information.

Part of the reason why the effect is so weak is that the LG G3 camera has a shallow-ish depth of field only at very close distances. The toy soldier in the photos is less than 30cm / 1ft away from the phone but we had to move the focus slider to almost infinity. The HTC One (M8) has the opposite problem - it can't focus on close-by objects.

Next up is the panorama. The HTC One (M8) panoramas are barely over 600px tall, meaning if you view it on a standard HDTV you'll have to zoom in nearly 200% and the One (M8) doesn't have any resolution to spare. The LG G3 panorama meanwhile is over 2000px tall so no zooming is necessary.

The HTC One (M8) also had issues with the stitching - some distant buildings look blurry due to improper arrangement of the multiple shots. The LG G3 photos are a lot cleaner.

Both phones feature dual-capture modes where the image from the front and back cameras are combined, picture-in-picture style. You can move the small window around and resize it as need be.

Winner: Tie. The LG G3 produces much better panoramas, but its HDR may be too restrained for some people (while others will dislike the over the top HDRs produced by the HTC).

The HTC One (M8) takes photos for refocus/shallow DoF effects quicker than the LG and all photos are available for those effects.