We've done our fair share of head-to-head articles this year, but there's no better way of completing it than by seeing the two most powerful phablet beasts stand against each other. It's the Sherlock Holmes against Professor Moriarty of the mobile world and we feel lucky to be able to witness the battle from the front row.

The Nokia Lumia 1520 to the Samsung Galaxy Note 3 really gave their all here as we compared the phones, the productivity tools, the cameras, the movie screens, the lot. After all it wasn't just about comparing two devices here - it was just as much about the clash between the Windows Phone and Android platforms.

The Samsung Galaxy Note 3 entered the contest with two distinct advantages. First thing is Android is far more mature at this point and simply came better prepared for the fight - it had all the apps, it had the better browser, better messaging, better video and music playing software, and it was willing to do anything to win, including letting you chose which app will be your default one. The Google platform is all about versatility and in a way that makes it the perfect fit for the kind of versatile devices that are phablets.

The other thing that helped the Galaxy Note 3 is that Android allows for the UI and functionality to be modified as any manufacturer sees fit. That gave Samsung the opportunity to bring lots of extra value with stuff like Multi-Window multitasking and S-Pen.

With WP not permitting custom skins the Lumia 1520 can be only as strong, as Windows Phone's biggest weakness. Still, Nokia did all in its power to add character, securing a stellar camera aboard the Lumia 1520 to go with a premium suit of apps, including Here and Drive.

All that said, we were thoroughly impressed by how much the Windows Phone ecosystem has matured in recent times, and even if it still has plenty of work to do to catch up with Android, it's got very few major gaps remaining. 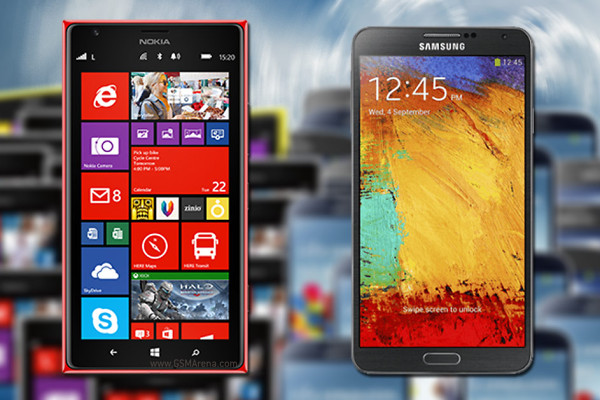 Adding the more balanced software package of the Galaxy Note 3 to the very closely matched hardware on the two devices, makes the Samsung phablet the better all-rounder. In many markets the stylus-touting phablet is also notably cheaper with the difference in Europe standing at no less than €150. So by all accounts the Koreans will be retaining the title in the category they created for yet another year.

But that doesn't really tell the whole story. For one, there are regions like the US, where Nokia managed to secure a much better position for its Lumia 1520 by trading availability for better pricing. So while the Finnish phablet is only available on AT&T there, it's a good deal cheaper on contract and a pretty smart purchase.

Then there's the fact that the TouchWiz interface has been around for quite a while and, for all its functionality, there are bound to be people getting tired of it and looking for a fresh alternative. Those can go for the Nokia Lumia 1520 safe in the knowledge that it's a proper phablet that will not only offer a stellar user experience, but also provide bragging rights now and then.

In a way, this is Nokia's great victory here - after years of waiting, we finally have a no-compromise top-end Lumia to cheer about. Those who wanted nothing but a Nokia smartphone that stood its ground against the mightiest smartphones in the world finally got it.

Anyway, back to the question at hand - which of these two should you buy. Counting the number of rounds taken by each device is the easy way to go about it, but it's not the one that yields the best results. Instead focus on those that really matter for your individual usage pattern and only count those. Better yet - read the whole chapters and see what made us pick one device over the other - perhaps not all of it applies to you, and you would call the score differently. Only then you'll be certain that you've truly picked the phablet that is right for you.