Outside the dry specs, what's most important about camera comparisons is the quality of the stills. In order for us to be fair we tested both devices in their maximum resolutions - 19 MP and 13 MP respectively - and then compared the oversampled 5 MP image of the Lumia 1520 with 5MP images that we've manually downscaled from the 13 MP Galaxy Note photos.

First off, let's check out the quality from the maximum resolutions that the phones are able to produce.

What's amazing here is that the 13MP photos by the Samsung Galaxy Note 3 don't seem to have any lower detail than the 19MP stills. This is probably due to the fact that the Lumia 1520 has a wider field of view - it has more information to capture with its 19MP sensor than the Note 3.

The Lumia 1520 has a softer but less processed images than the generously sharpened images of the Note 3. The Note 3 photos also have slightly higher noise levels but they also have more saturated colors and a punchier, more contrasty look. 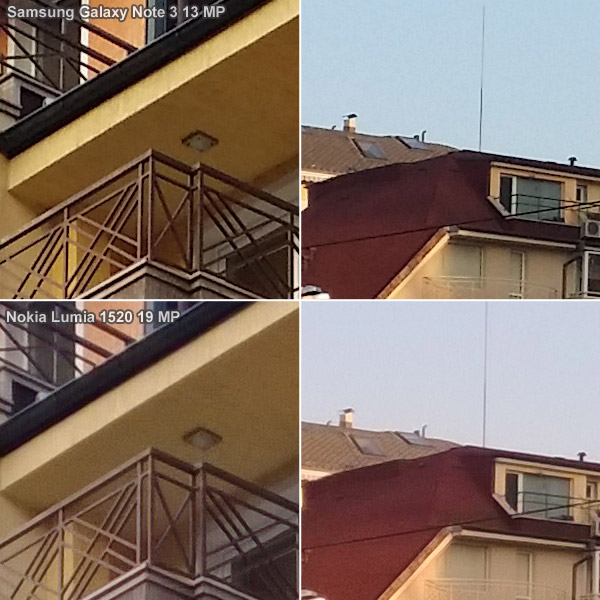 When we look at the lower resolution samples, the detail resolved by the manually downsized photos by the Galaxy Note 3 seems to be higher. However it still bears that oversharpened look whereas the Lumia 1520's image looks natural and more pleasing. Again, colors by the Lumia 1520 appear closer to real life. However some prefer their cameras to be punchier with the colors so we'd leave that choice of preference up to you. 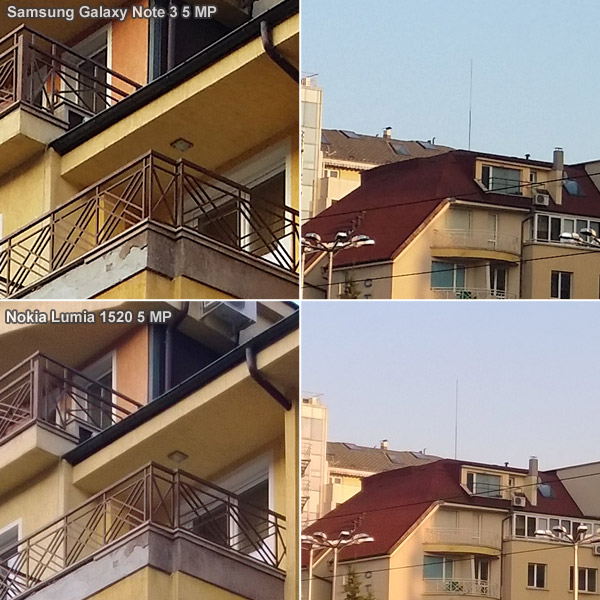 Overall, we'd say the images on the Galaxy Note 3 have slightly more detail with punchier colors and a tad better contrast - the Lumia 1520's photos are also great when it comes down to detail, they sport a more realistic look in terms of colors and the camera is pleasantly laid back on additional processing such as sharpening.

When we factor in the Lumia 1520's 2x lossless zoom into the equation things get interesting. It's telling how much different is the field of view of both cameras since it's only at 2x zoom that the Lumia 1520 matches the Galaxy Note 3.

As for the image quality, things look much like they did when we downscaled the 13MP Galaxy Note 3 image to 5MP. The detail resolved by both cameras is pretty much equal even despite the oversharpening applied by the Galaxy Note 3. The Lumia 1520 offers a more natural and pleasing image. 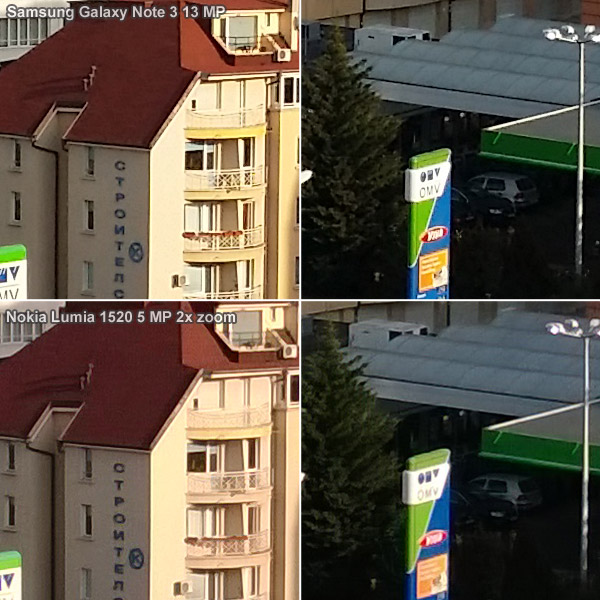 Contrast is slightly higher on the Galaxy Note 3. Colors look more realistic on the Lumia 1520 whereas the Note 3 makes them punchier every time.

You can check out the full resolution samples below. For the Nokia Lumia 1520 we've lined up the oversampled 5 MP images alongside the 19 MP full-res ones.

You can check out our photo comparison tool for even more comparisons between the two below.

Winner: Tie. The Lumia 1520 has a more laid-back processing and a more natural look to its images. In good light however, the Samsung Galaxy Note 3 produces equally good photos - those are even punchier despite having slightly more noise. At times we noticed its camera resolve slightly more detail, but that's due to its narrower field of view, which makes objects slightly larger than on the Lumia 1520. When you compensate the difference by physically moving the Lumia closer to the scene, the resulting photos have just about the same resolved detail. That speaks well of the Samsung Galaxy Note 3 13MP camera, which has a resolution handicap to begin with. The Lumia 1520 however held its own quite well.

Moving on to low-light photography. For starters, the Nokia Lumia 1520 has the upper hand, thanks to its dual-LED flash - the Galaxy Note 3 only has a single LED. It's important to note as well that the Nokia Lumia 1520, by default, flashes its LEDs prior to taking an image if the light isn't as favorable in order to get good focus. The Galaxy Note 3 doesn't make use of its LED flash for that purpose.

We started our low-light test with a studio shootout. We took three consecutive test samples with each smartphone: (1) Low-light, no flash; (2) Low-light, with flash; (3) A pitch black scene where each camera would have to focus and snap without seeing much.

In the flashless low-light test both devices focused equally fast but the end result favors the Nokia Lumia 1520. Its images were considerably sharper with much more detail and much less motion blur. The Galaxy Note 3 is quick to mask noise and it smeared a lot of detail along the way, resulting in a watercolor-like effect. Both devices chose ISO 320 for this scene with relatively close shutter speeds. The color reproduction on the Lumia 1520 was a little colder in this mode.

Next up was shooting the scene with a flash. The Nokia Lumia 1520 has a better flash than its competitor - in this image the Nokia Lumia has captured the true color tone of the subject and the detail level has gone up considerably. Even detail beyond the subject of the image is better than on the Galaxy Note, which managed to squeeze a little more detail but still wound up a distant second. That's even with the Samsung Galaxy Note 3 choosing a lower ISO sensitivity (100 vs 200). Shutter speeds were again similar.

And finally, the pitch black test, where both devices would need to illuminate and focus on the scene without so much as a glimmer of light beforehand. We guess the Lumia 1520's focus light helped it a lot in this scene as the Note 3 images consistently missed focusing on the subject. In this scene the Galaxy Note 3 kept things at ISO 200, while the Nokia Lumia 1520 upped it all the way to 640 ISO. Shutter speeds were similar again. 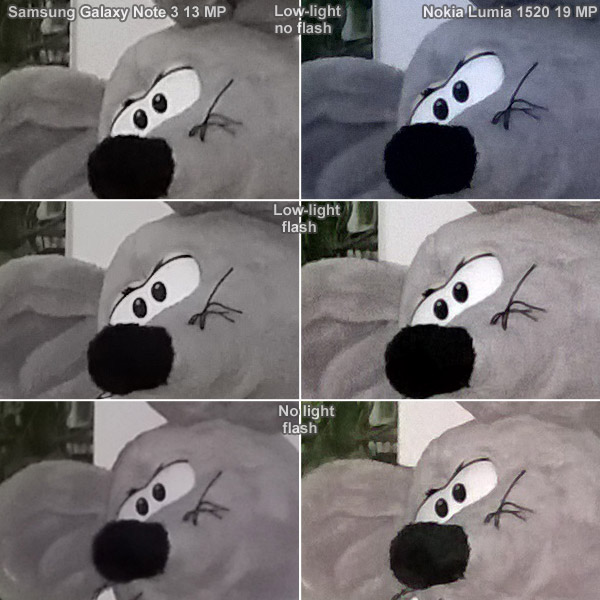 When we look at the downscaled images, the Nokia Lumia 1520's lead is solidified. Aside from getting the wrong color tone in the first image (low-light without flash) the Lumia 1520 dominated its rival - it has better detail levels and its flash is more powerful. 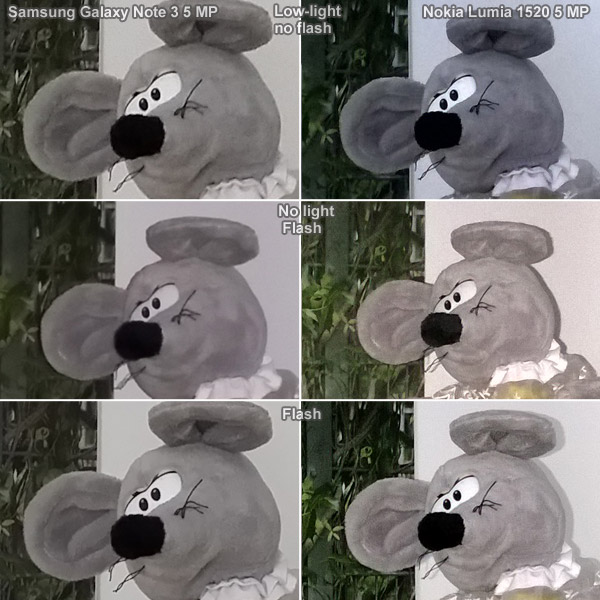 It came time to step out of the studio and check how the phones perform in real life low-light scenario. This time around we also put to use Samsung's revamped Night mode - the so-called Smart Stabilization.

The Smart Stabilization mode is called Smart because once you toggle it to on, it activates on its own only when needed. It's also called Stabilization because it snaps several photos and stacks those to create sharp, well-exposed night-time shots with a surprisingly low level of noise.

The Samsung Galaxy Note 3 was initially behind the Lumia 1520, but once we turned Smart Stabilization on, it managed not only to come up with more detail, but also with lower noise. The Lumia found it hard to keep up, but held its own with a more balanced night-time exposure that left the highlights much better exposed at the expense of only slightly darker shadows. 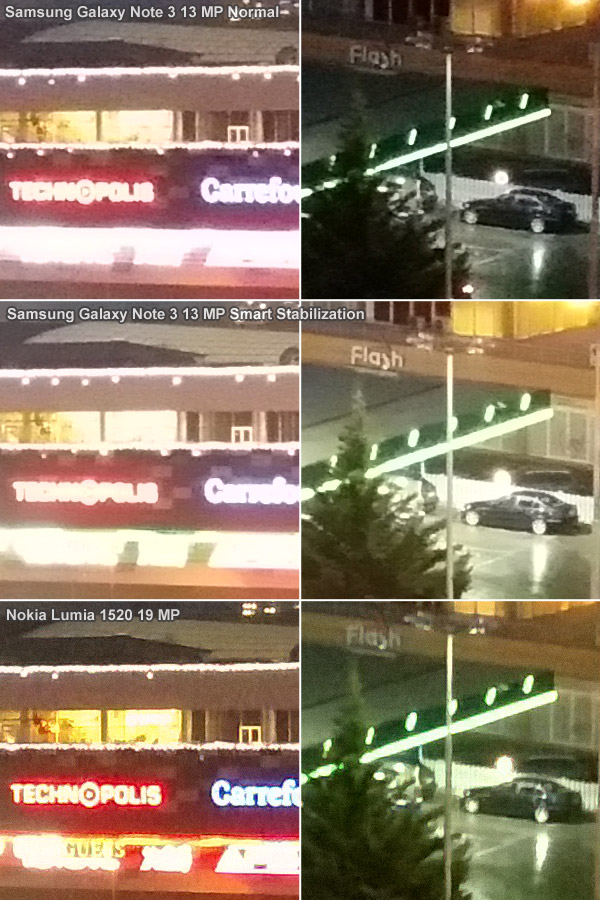 Here go the full resolution 5 MP + 19 MP samples from the Nokia Lumia 1520 if you want to go pixel peeping yourself.

Winner: Nokia Lumia 1520. In low light the Note 3 performed worse than he Lumia 1520 in the studio part of our test. The Lumia 1520 had a better flash performance (with pre-focusing in the dark) and sharper images with lower noise across the board so it's the better choice for indoor shots. Outdoor the Note 3 put up a much better fight, especially when we used its Smart Stabilization mode, which delivered surprisingly high detail and low noise. Still, the Lumia 1520 held its own and thanks to its optical image stabilization you should be able to come home with usable handheld shots more frequently. It also managed to preserve better the detail in the brightly lit signs by choosing a more balanced nigh-time exposure.