Above the display we have the earpiece, as well as a bunch of sensors. The traditional ambient light and proximity sensors are joined by an IR gesture sensor, which enables the Air gestures in applications such as the web browser and music player. There's also a 2.1 megapixel front-facing camera for video calls and a status LED up there.

Below the display, you will find the trio of resistive navigation buttons. They are separated by tiny strips of chromed plastic.

A look below the display

The left side is home to the volume rocker and the shortcut button. The latter is quite useful and we will take a closer look at its functionality later on.

The volume rocker and the shortcut button on the left

The power/lock key is on the right side. There is nothing else there.

The power/lock key on the right

The top of the Galaxy S5 Active features the 3.5mm audio jack, the secondary microphone and the IR blaster that lets the smartphone remotely control various home appliances. There's also a remote control app with a pretty rich database preinstalled, so the functionality is available right out of box.

The top of the device

The microUSB 2.0 port and the mouthpiece are located on the bottom of the handset. The former is expectedly covered by a flap.

The back of the handset is home to the 16MP camera lens with LED flash, the heart-rate monitor, as well as the single loudspeaker. A Samsung and an AT&T logo keep them company.

The back of the Galaxy S5 Active

The heart-rate monitor is located right next to the LED flash at the back. To use it you should hold the phone as you normally would with one of the fingers resting over the sensor and keep it steady for a few seconds.

A peek under the battery cover

It is worth noting that the battery cover is harder to remove than the one of the regular Samsung Galaxy S5, which is nothing out of the usual given the extra ruggedness of the Active version.

And here are some live pictures of the Samsung Galaxy S5 Active European model.

The front of the European Galaxy S5 Active

A peek on the left and on the right side

The top and bottom of the EU Galaxy S5 Active

The rear side of the EU Galaxy S5 Active

Considering that it has the same 2,800 mAh battery as the regular Samsung Galaxy S5, it is hardly a surprise that the Active showcased a similar battery performance. The handset achieved an endurance rating of 70 in our battery test. 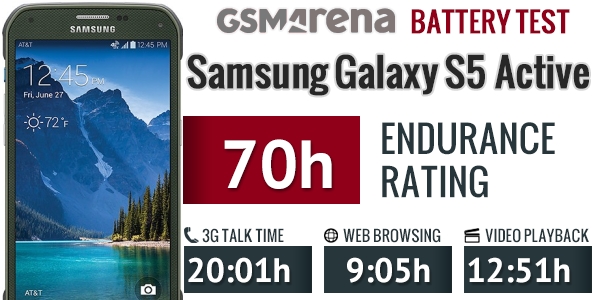 The above means that you your handset will easily make it through almost three full days if you use it for an hour each of telephony, web browsing, and video playback. The replaceable battery on the other hand, should keep power users calm, as they can pick up a spare one.

The Samsung Galaxy S5 Active features extensive connectivity options headed by LTE with speeds of up to 150Mbps / 50Mbps. Where a 4G network isn't available, the phone can do 42Mbps downlink and 5.76Mbps uplink.

A feature borrowed from the iPhone (which later dropped it) is called Download booster - files over 30MB are downloaded over LTE and Wi-Fi simultaneously. This also works for native apps that have been set to use Wi-Fi only, but not for third party apps.

Bluetooth 4.0 + LE is also available (it's used on all new smartwatches and other wearables), plus there's ANT+ for additional sports gadgets. NFC is available for quick pairing, with Android Beam and S Beam handling file transfers.

GPS and GLONASS receivers are available for accurate location data.

There is a microSD card slot as well, on top of the 16GB of built-in storage (11.2GB are actually available to the user). The cable connection takes place via microUSB 2.0, not 3.0 like in the regular Galaxy S5.

The Samsung Galaxy S5 Active also supports USB-on-the-go, but you will need to buy an adapter for that. TV out is available too, if you have an HDMI adapter and the phone can output surround sound. Wireless screen mirroring is available too.

An IR blaster allows the phone to control a TV using Samsung's Smart Remote app. We will take a closer look at it later on.

If you have certain Samsung or HP printers, you can wirelessly send photos, documents and other things (e.g. web pages, contact information) to be printed too.