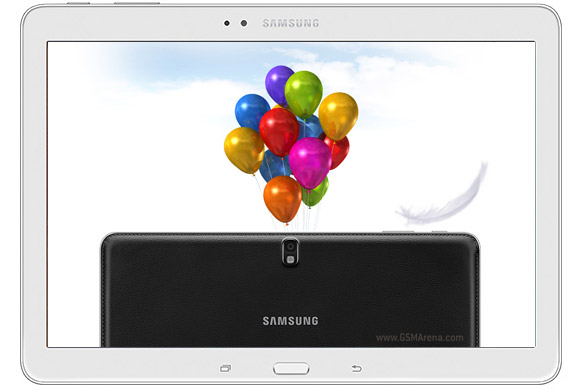 The similarities between the two indeed span almost the entire spec sheet, S Pen aside. The new, lighter build of the Tab Pro 10.1 is a welcome change however, and really makes a difference in daily use.

The 10.1" Super Clear LCD is one of the best tablet screens we've seen and the chipsets are the fastest of the current generation. The software suite based on Android 4.4 KitKat is strongly enhanced by the latest TouchWiz - whether you like the new Magazine UI, the Multi Window feature is a must-have for tablets over 7 inches.

Samsung also pre-loaded an impressive suite of apps, including one of the most advanced Office apps we've seen, plus other premium tools for computer interfacing or business conferencing.

Still, the Galaxy Note 10.1 (2014) is worth a look. It may be heavier but you get the S Pen and all the features it enables, the hardware being virtually the same. The Note 10.1 has been around for a while, so you might find better deals for it.

The Apple iPad Air is still the market leader and for good reason - it's light, despite its aluminum unibody, and polished to a shine (in terms of both software and hardware). However, Apple's conservative approach basically makes it a large-screened iPhone and we really started getting into the multi-tasking features and rich homescreen (as opposed to a grid of icons). You do get a far richer library of tablet-optimized apps, though.

The Sony Xperia Tablet Z scores points for design too with its beautiful aluminum-and-glass build. It's stunningly thin at 6.9mm and weighs only about 20g more than the Galaxy Tab Pro 10.1. Better yet, it's water resistant so you can use it in the bath or in the kitchen (there's even a special Kitchen Edition) and by the pool. On the cons side, the chipset is a generation older and the software is a step behind too.

Samsung's approach to the market is to throw things at the wall and see what sticks. The Koreans don't mind having products that overlap either. In the end, sales will still go on the budget sheet. That's the story of the Galaxy Tab Pro 10.1 and Galaxy Note 10.1 (2014).

If you're not the artistic type and you won't be doing too many handwritten notes, then the value of the S Pen goes down. Getting a lighter tablet is certainly worth losing the S Pen if you weren't going to use it much.

As for rival droid tablets, the Tab Pro 10.1 has its chipset to lean on (newer than the Xperia and no Intel Atom stuff that's coming from Asus and Acer), plus an app and feature package that is equal, often better. It's Apple then, the likely main target - and Samsung now has a Pro for each iPad screen size.