The biggest change is weight - the Wi-Fi only version of the Tab Pro 10.1s weighs 469g, while the LTE model is 477g. Both are 70g lighter than their Note 10.1 (2014) counterparts and the same weight as the iPad Air versions almost to the gram.

This vastly improves the handling. Keep in mind that the Android tablet is wider (16:10) than the iPad, which is squarer (4:3). And the Tab Pro 10.1 is meant to be held in landscape orientation, putting even more weight on your wrist if you hold the tablet by the edge.

The screen bezel is unchanged since the Note 10.1 (2014) but the change in weight makes extended use of the tablet a lot more pleasant. The bezel is just wide enough to accommodate your thumb, but we often preferred resting the Tab Pro 10.1 on our palm.

The faux leather back offers enough grip not to worry the tablet will slip. Note that the plastic used for the back feels different from others we've seen, but it still offers a semi-convincing leather feel.

We mentioned orientation and for the Galaxy Tab Pro 10.1 landscape is the way to go. The hardware keys on the front are positioned for it and the stereo speakers on the short sides reinforce that. We would have preferred front-facing speakers as they direct the sound at the viewer and you're less likely to block them with your palm while holding the tablet. Still, the side speakers sound a lot better than a single speaker at the bottom, so that's still a win for the Tab Pro.

The tablet can be used in portrait too - it makes reading long text easier - but reaching the hardware keys becomes a bit of a stretch. Samsung still refuses to use on-screen buttons (which solve this problem), but at least the company moved to the newer arrangement of keys featuring the app switcher.

We knew the Samsung Galaxy Tab Pro 10.1 had an RGBW PenTile display before we even got the review unit. The same tech was used on the Galaxy Note Pro 12.2 and the Note 10.1 (2014) before it. 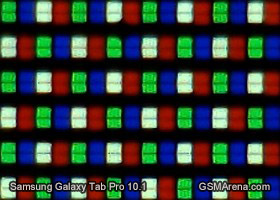 All three tablets have the same screen resolution - 2,560 x 1,600 - but since the 10.1" ones are smaller than the Note Pro 12.2, their pixel density is at almost 300ppi and the characteristic crosshatch effect is less noticeable than on the 247ppi 12.2" screen. You can still see it if you know what to look for and take a close peek, but it's not annoying really.

The display itself renders beautiful colors and you can tweak those with the Display mode option in the settings. There's Adapt display that automatically adjusts settings based on the image on the screen (this only works in some apps), Movie mode (which offers warm white balance and balanced saturation), Dynamic (which boosts the saturation) and Standard (this one aims for pure white and accurate colors).

The Galaxy Tab Pro 10.1 screen is fairly bright but we still had the brightness slider set at 50% or higher. The auto-brightness option works well too and you get a slider to tweak it.

Viewing angles and contrast of the screen are excellent.