The Transformer Pads are a rare breed but that's hardly a surprise given it's almost exclusively tablets that make a name for ASUS as an Android manufacturer. The Nexus line obviously, the Transformers, the Memo pads and the PadFone Infinity.

The latter is the closest they have to a phone but it too is a convertible tablet more than anything else. So, ASUS may've given up smartphones for good but that's not stopping it from leaving a profound mark with clever hybrid devices.

The Transformer Pad TF701T is one and it's the fourth generation tablet/ultrabook, a concept ASUS was exploring before the Windows 8-powered devices arrived at the scene. And the latest transformer certainly does well to upgrade the predecessor in terms of screen resolution and processing power.

The 10.1" IGZO IPS display is not only power-efficient, but very color-accurate and sufficiently bright. The resolution is as high as it gets on a tablet, at 2560 x 1600, and is a pleasure to look at. 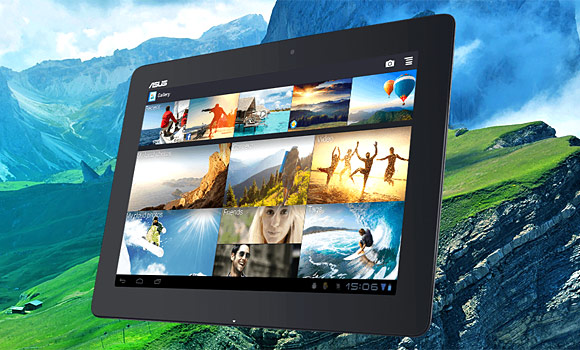 The good news keep on coming on the hardware front with Nvidia's top Tegra 4 chipset boasting 1.9GHz quad-core Cortex-A15 CPU and a whopping 72-core ultra-low-power GeForce GPU. As we found out it manages to keep up with the powerhouse that the rivaling Qualcomm Snapdragon 800 chipset is.

The keyboard dock hasn't changed significantly - the full-size USB 3.0 port is the most notable difference. But it does add a quite comfortable QWERTY keyboard and an extra pack of juice, for several hours of extra use on top of the tablet's own battery. There's a full-size SDXC memory card slot too.

In fact, the only thing that got downgraded is the camera, which has lost the LED flash too. But that's never going to be a huge loss in a tablet, let alone one that converts into an ultrabook. The more serious issue to consider is the lack of an LTE or 3G-enabled version - but if the original Transformer Pad lineup is anything to go by, these should be in the pipeline.

Even such a well-equipped and properly powered gadget isn't going to be an easy sell for ASUS, as the competition isn't having a break either. And the fact that some of the most likely contenders are not even droids doesn't make it any easier.

Nokia's first ever tablet, the Lumia 2520, is rocking a potent Snapdragon 800 chipset and running Windows 8.1 RT, touted as the mobile OS that's best at getting things done. Make no mistake, though - this is isn't a proper Windows slate and the lack of RT apps is certainly limiting the capabilities of the first Nokia slate.

The Lumia 2520 is offered with a detachable keyboard too, which also comes with an extra battery that provides up to 5 hours of additional power. The problem is the combo will cost about €100 more than the Transformer Pad and you will be getting a lower resolution screen. The LTE support will probably help make up for that for many of you, though.

The Microsoft Surface 2 is another formidable rival, in its second generation too. It now has an improved touch keyboard and the power (or lack thereof) of Windows RT 8.1 OS. It's not a full-blown Windows experience, but you'll still get a plethora of unrivalled productivity tools such as MS Office.

On home Android turf, the Galaxy Note 3 10.1 2014 Edition packs a similarly high-resolution display, but in a lighter and slimmer body. Granted, it's a plastic one, but the leather finish looks even better on a larger scale than on the Galaxy Note 3 phablet.

The S Pen is of course on board and in its latest iteration, it has learned a lot of new tricks and has become even better at multi-tasking.

The Sony Xperia Tablet Z is light, beautifully crafted and isn't afraid of the elements thanks to its cleverly designed glass body. It costs about the same as the Asus tablet but for the price ASUS throws in the Mobile dock, which the Japanese, just like Samsung, have no meaningful response to.

When we're talking tablets, there's no we can do without Apple, especially with the new iPad Air just unveiled. The slimmest and lightest full-sized slate around, the Apple flagship also has the richest selection of tailor made apps in the tablet space. However its lack of expandable storage means you will need to go for the 32GB version at least and if you need the extra productivity coming with a keyboard dock that's a premium of at least €200 you have to pay. It may as well be worth it, but with this kind of price difference the two slates aren't exactly direct rivals.

The competition in the tablet market has never been more fierce, but this Transformer seems to have found its own niche. The Windows-RT-powered hybrids will be the real test, with both Surface and Lumia devices bound to heap pressure on droids with a thing for productivity. Yet, Android seems to have a great defense line prepared with Asus and the Transformer Pad.