The retail box of the Nexus 4 is barely bigger than the handsets itself. It packs a charger and USB cable, a SIM eject tool and a Quick start guide. That's it - as you've probably noticed, there's no headset included in the box (even though there's more than enough room). Again, this is a 300 bucks handset, plus you probably have a headset lying around.

The looks of the Nexus 4 are a crossover between those of the Galaxy Nexus (the front) and the Optimus G (the back). The top and bottom sides are curved unlike the rectangular design of the Optimus, which accounts for it being taller and it maintains the Nexus look from the previous phone. The phone is flat on both sides, which is great news for people who weren't fans of the humpback design of the Galaxy Nexus.

The front of the Nexus 4 is almost featureless when the display is off. This contrasts with the back, which has the same glass coating and a curious 3D-like pattern as the Optimus G. By the way, both the front and the back of the LG Nexus 4 are covered in Gorilla Glass 2, which should ensure enough protection against scratches.

The front glass is curved at the edges, which is great as swipes starting from the edge of the screen are important (e.g. swiping through the pages of the lockscreen). This is somewhat similar to the design of the Nokia N9 and we like it.

Nexus 4 next to LG Optimus G and Samsung Galaxy Nexus

The back feels a lot less like the iPhone 4/4S and more like Samsung's hyperglazed coating, meaning more like plastic than real glass. The Nexus 4 has similar finish to the LG Optimus G - the glass is polarized, the pattern shifts depending on viewing angle and lighting, causing the illusion of a 3D pattern. The effect is more prominent on a black handset than on a white one.

The LG Nexus 4 in white

Going back to the front side of the new Nexus 4, it is occupied by the huge 4.7-inch display of WXGA resolution. We'll take a closer look at the display in the next chapter.

Between the two sheets of Gorilla Glass 2 on the front and back there's double framing - recognizable by a plastic and a metal strip that run around the sides of the phone. The metallic strip is even visible when looking the handset dead on and is one of the few design accents.

A look at the shifting pattern of dots on the back

And here's how it looks through our microscope: 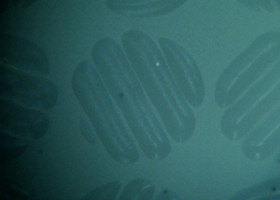 Pattern on the back of the Nexus 4 through a microscope

Above the screen we find the earpiece, a couple of hidden sensors and the 1.3MP video-call camera. Below the display there's only a notification LED in the middle. It may look a bit like a key, but it isn't - the Nexus 4 uses on-screen buttons, unlike the Optimus G. The notification light's position is the same as on the Galaxy Nexus, making the two look even more alike. The LED pulses to alert of emails, missed calls and Facebook events. There's no dedicated setting for it, other than an On/Off toggle, but several third-party apps in the Play Store will let you fine-tune the LED's behavior.

The left side of the phone features the microSIM compartment (you'll need the SIM eject tool to open it) and the volume rocker. The right side has just the Power/Lock key.

The 3.5mm audio jack, along with the secondary mic, are on top. The bottom hosts the TV-out-supporting microUSB port and the primary mic. There are a couple of screws that secure the back as well. Keep in mind though that the Nexus 4 uses the SlumPort technology as opposed to MHL, so any adapters you might currently have are incompatible with them.

The 3.5mm audio jack and secondary mic on top • the microUSB port and the primary mic

We already mentioned the glass-covered back, but haven't covered yet the most important things there, the 8MP camera and LED flash. Both the lens and the flash are flush with the surface and there's nothing protruding like on the Optimus G. Unlike the Galaxy Nexus, the camera on the LG Nexus 4 is more traditionally positioned.

Just below the camera lens is the Nexus logo (to let everyone know the Holo UI is the real deal, not some third-party skin that looks like it) and further down is the LG logo, next to the loudspeaker.

Under the back cover is a 2100mAh Li-Po battery, developed by LG Chem and promising increased lifespan of 800 charge cycles. The cover itself is non-removable - that is to say, not designed to be user removable, but it can probably give in if you undo the screws - though it would be still impossible to stick a spare battery in there. There's no microSD card slot either.

Official battery life quotes promise 390 hours of standby and 15 hours of talk time on a 3G network. The Optimus G delivered on the talk time and we expect the Nexus 4 will too (we'll update this review as soon as our battery tests are done), but the Optimus was nothing spectacular when it came to web browsing or watching videos. We'll see if running stock Android 4.2 makes a difference to a custom skin.

We should also mention that the Nexus 4 supports wireless charging. It uses the Qi (pronounced chee) standard so any charger will work - there's a Nexus-branded Wireless Charging Orb, which looks really cool but isn't available yet. Nokia's Lumia phones use the same wireless charging standard, so their accessories will work too - really, just google Qi charger and you'll find plenty of options.