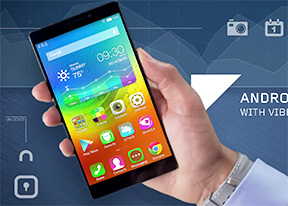 The Lenovo Vibe Z2 Pro is one of the largest smartphones to pay our office a visit lately, but that was always to be expected from a handset with a 6" screen. In fact, Lenovo has done a great job of trimming the bezels and making the phone as compact as it can be.

It measures 156 x 81.3 x 7.7mm, which is slightly shorter and slimmer than the Huawei Ascend Mate 7 - the phone that claims to offer the best screen to body ratio currently in the market. The Vibe Z2 Pro is slightly lighter too, although at 179g we wouldn't say it's a device you can slip in your pocket and forget about.

The Vibe Z2 Pro is just 3 mm taller and wider than the Samsung Galaxy Note 4, which features a 5.7" display and has roughly the same footprint as the iPhone 6 Plus.

Lenovo has gone for a metal body for the Vibe Z2 Pro to further underline its premium positioning. The single plate of aluminum at the back extends to the sides and sports a very cool brushed look. We have to admit that we preferred it to be in any other color rather than the gold that our review unit came in.

There's some plastic too - the top and bottom are made from it, but it's of the high-quality matte type so it goes along well with the metal back.

What we are not particularly fond of is the piano black patch at the top of the back panel that houses the phone's 16MP camera lens. There's also a red accent in there, but the whole thing looks a bit out of place here. Still, that's not taking too many points away and the Vibe Z2 Pro is still a looker of a phone.

The piano black finish at the back

The phone also does pretty well as far as handling is concerned - the slim bezels make the huge screen manageable although just as on the other devices in the 5.5"+ niche single-handed usage is out of the question more often than not. We are also no fans of the sharp edges on the four sides. While they certainly look cool, they make holding the phone for prolonged periods of time somewhat uncomfortable - there's no comfortable spot to rest your fingers or palm against.

The Lenovo Vibe Z2 Pro stacked up against the competition

The build quality is impeccable, though. There are no squeaks and the phone doesn't bend under pressure. It's fair to note that the back of the phone isn't as tough as it looks. Our test unit had some little dents suggesting that the slim metal plate doesn't particularly enjoy rough handling.

The front of the Lenovo Vibe Z2 Pro is housing the big 6" QHD display in addition to the three capacitive keys below it: Menu, Home and Back. The side bezels are very thin as we already mentioned. Above the display, there's an earpiece, a 5MP selfie snapper on its right and proximity and light sensors. There's a LED notification light on the top right.

A look at the Vibe Z2 Pro's front

On the right side, there's the dual-SIM card tray. It requires a SIM ejection pin to pop open. Sorry, there's no microSD card slot here. Below it, there's the unlock key, which is conveniently placed near the center of the phone so it's easier to reach.

The left side is almost bare, with only the volume rocker sitting near the top left corner.

Lenovo has placed the single loudspeaker at the bottom to the left of the microUSB port. Next to it, there's the main microphone. The 3.5mm headphone jack is at the top.

The top houses the 3.5mm jack • The main speaker is at the bottom

Near the top of the back panel there's the 16MP camera with optical image stabilization and dual LED flash. The Sony-made BSI 16:9 sensor can record 4K video as well as 720p video at 120fps, making it one of the most impressive sounding packages in the market. We'll see if it also performs as well in real life in a while.

The camera module is a love-it-or-hate-it affair

Below the camera section, there's a not-too-big Lenovo logo, leaving the rest of the back free to showcase the cross-brushed aluminum pattern.