The Nexus 5X prominently features Nexus, Google and LG logos. It's a compact box with just the essentials - the phone, a charger and a cable. The charger and cable are pretty great though - you get 5V @ 3A charging (total of 15W) and the cable has Type-C connectors on both ends.

The retail box • Nexus 5X, charger and cable • a closer look at the USB Type-C cable

The Type-C cables we've seen this far were C only on one end, the other one was a traditional square Type-A plug. This makes it easy to plug into a computer, but the Type-C plug was design to be the sole connector you'd use and such half-measure cables only prolong the inevitable.

Plus Google doesn't think you'll do much information transfer over a wire, not when it has all these cloud services to offer. You'll need a C-to-A adapter if you do want wired data transfer, unless you have a Chromebook Pixel or another recent Type-C packing laptop.

The LG Nexus 5X measures 147 x 72.6 x 7.9mm. That's taller and wider than its predecessor, with less efficient use of the front surface area, but it is thinner and barely heavier. And don't forget you get 0.2" more screen with the 5X.

You'll notice two grilles on the front, Moto style. And just like the Moto G, the lower one is a dummy - only one grille hides an actual loudspeaker. This design can make it easy to confuse which way is up, the phone is just so symmetrical.

The LG Nexus 5X was allotted the mid-range role, but both it and the premium Nexus 6P have a fairly consistent look.

From the front it could easily be mistaken for a Motorola with its deceptive dual but not really speaker setup. From the back, the centered camera with laser AF hints at LG, but the lack of the trademark back buttons sets it apart from LG's smartphones.

The LG Nexus 5X in the hand

This slightly confused design - part Nexus, part Moto, not much LG - doesn't compare great against other smartphone designs, but on its own it is fairly attractive.

The front is completely flat with just a tiny ridge where the front Gorilla Glass 3 meets the side of the phone. The sides are also flat, but lean slightly inward, which gives you a better grip on the phone as you palm it.

The back breaks away from the straight lines and is all curves, including a smooth buildup to the camera hump. The hump is about average in size and is centered so it doesn't make the phone wobble. The material is a soft polycarbonate that's very pleasant to the touch, but its semi-matte finish does collect its fair share of fingerprints. The corners are also a bit more rounded compared to the original Nexus 5.

The rigid build and 136g of weight make for a very good in-hand feel of the Nexus 5X but most importantly, when you pick it up for the first time it feels surprisingly light for its size. While it's bigger than the 5 and the side bezels could have been thinner, the phone is still manageable with one hand. The camera hump doesn't get in the way, but on a few occasions we touched it with our fingers (smudging the lens) when aiming for the fingerprint reader. 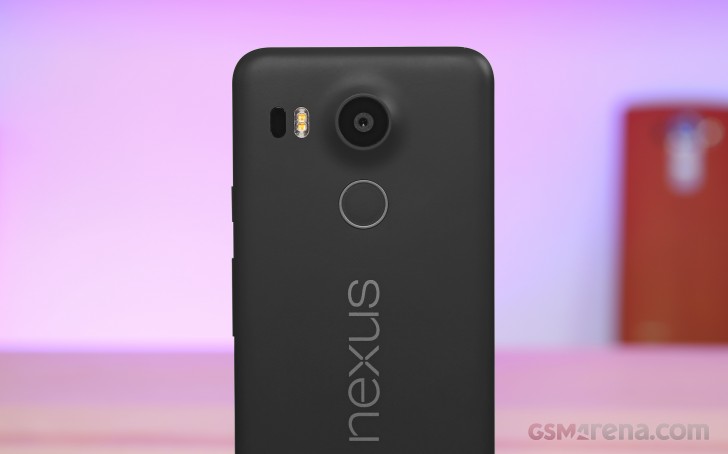 The 5X is taller, in part thanks to the bigger 5.2" screen and partly due to the extra bezel above it. The speaker grille there masks the earpiece, but not an actual loudspeaker while the lower grille is home to the LED notification light. That honor goes to the grille below the screen.

Also above the screen is the new 5MP/1080p selfie camera, a proximity sensor (below the grille) and an ambient light sensor. A notification light hides in the lower speaker grille. The Ambient display feature is more informative though, it lights up the screen in dim black and white when a new notification arrives or when you pick up the phone.

A Moto-like front • earpiece grille on top • loudspeaker grille below

The controls have been reshuffled slightly, making the phone easier to hold in your right hand. Both the Power and the Volume rocker are now on the right side and then there's the fingerprint reader on the back, of course. With the right hand your index finger lands right on the reader and your thumb is on the buttons. With the left hand you have to use your index finger either for the reader or for the buttons.

The keys themselves are quite narrow and low, not very comfortable for use.

The left side houses the nanoSIM card slot, which requires a tool to open. It goes without saying that there is no memory card slot. Which isn't that great, you get 16GB as base and you can only go up to 32GB but no further. That's not much in 2015 and $370 isn't that cheap (the Nexus 5 had 16GB for $350 two years ago).

Anyway, there's a mic on top and on the bottom. Also below are both wired connections - the 3.5mm audio jack and the USB Type-C cable. The new reversible connector comes with promises of great features, but LG and Google managed to avoid them somehow.

It doesn't support Type-C's video out capabilities or even SlimPort like the Nexus 5. It doesn't do USB Power Delivery either (nor Qualcomm's Quick Charge), but at least it comes with a reasonably powerful charger - 5V @ 3A (15W or basically equivalent to Quick Charge 2.0).

The Nexus 5X also drops the support for wireless charging, even though its predecessor was among the early adopters.

In 2013 the Nexus 5 had a pioneering spirit with things like wireless charging and camera accessories. The latter wasn't nearly as successful as the former, but the ring around the camera allowed for add-on camera lens to be snapped on with magnets.

Again, not very useful, but we liked that the phone experimented with new things, something that fit the spirit of cutting edge power users who were buying a Nexus. The Nexus 5X feels pretty safe and unadventurous by comparison.

That's not a bad thing when the Nexus 5X is positioned as a mainstream phone, the hardware is solid. But it does lose some of its coolness for tech geeks.