The device comes in a rather compact dark grey cardboard box with prominent Q6 branding on the front, the "Life's good when you play more" logo on one side, and the regulatory label on the other. Opening the box up reveals the phone front and center, under which we find the charger, a USB cable (with microUSB on the phone side and a standard USB-A connector at the other end), and a pair of bundled earbuds. All of these accessories are white in color even for our black Q6, something which trips our OCD but you will probably be fine.

The charging adapter brick is disappointingly only a 6W part, which means fast charging is nothing but a mere pipe dream. We're not so fondly remembering a time when 5W chargers used to be the norm in the mobile world, thankfully most of it has moved on from that era.

From this point of view, the Q6 is a different beast depending on which part of it you're glancing at. The front screams G6 - it's very much like a slightly smaller iteration of that phone, aside from the less prominent LG branding hiding in the bottom bezel. The 7000 series aluminum frame has a similar feel too, though it is slightly more rounded towards the screen and the back. 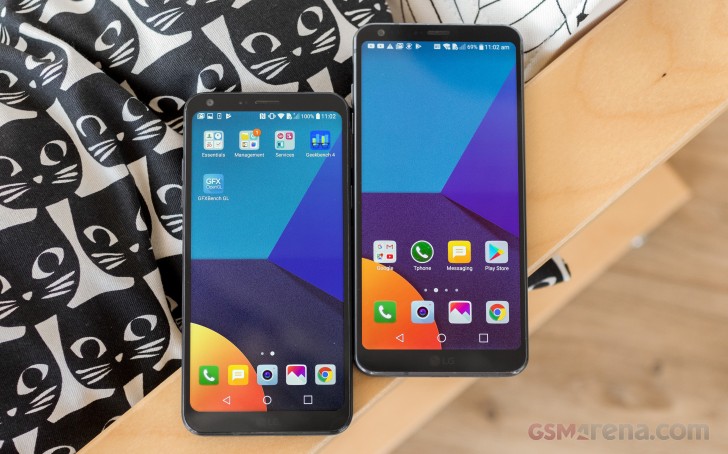 Because of the small bezels and tall screen aspect ratio, it's quite compact and easy to use with one hand. Its dimensions are almost identical to last year's Galaxy S7, which had a 5.1" display. The Q6's 5.5" panel packs 5.5 more cm2 in pretty much the same hardware package.

The display is covered by Gorilla Glass 3, and unlike some other recent mid-rangers it's a straight sheet, not curved on the sides. Once again this reminds us of the G6. Using GG3 instead of GG4 or GG5 probably has something to do with the bill of materials LG was aiming for.

On the rear this is still instantly recognizable as an LG phone from 2017, but you won't confuse it for one of the Korean company's flagships. That's due to the single main camera, as well as its placement in the top left corner of the back - no center-mounted dual camera setup here. The Q6 also has a single rear-facing speaker, which is something we haven't seen in a while, with loads of models going for the iPhone-inspired bottom-firing option. 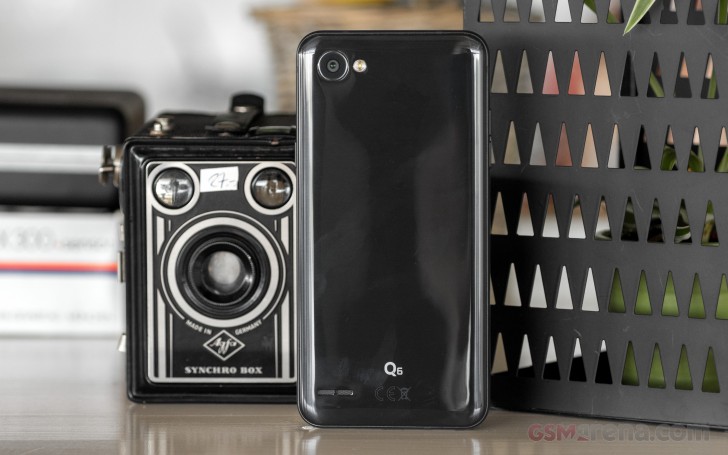 The Q6 doesn't have a glass back, instead using the much cheaper plastic. This has one advantage, namely that it won't easily shatter if you drop the phone, but there are quite a few disadvantages. For one thing, it's very prone to scratching - and our review device, which hasn't been treated more unfairly than other phones, has already accumulated some nasty marks. The back is also a fingerprint magnet, less so than some glass-endowed handsets, but you'll still need to carry around a cleaning cloth if you can't stand that oily feeling mess.

The Q6 is being offered in Astro Black (the color of our review unit), Ice Platinum, Mystic White, and Terra Gold, but not all colors may be available in all markets (and some are model-dependent). 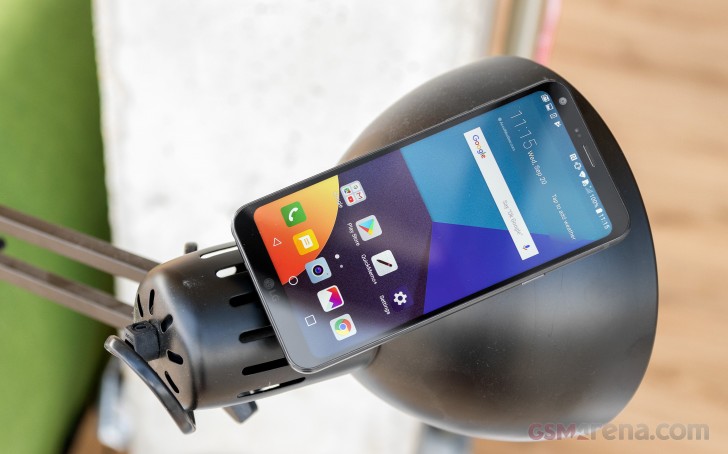 LG's rated the Q6 as being MIL-STD-810G compliant, which means it should be able to withstand temperature extremes, rain, humidity, sand, and dust. That said, it has no water resistance certification so you'll want to be careful not to drop it in a puddle or any liquid really.

LG took the ever so prevalent 'glass sandwich' design and adapted it to the Q6's price point - with this device, we get a glass-aluminum-plastic sandwich in fact. Since the back isn't metal, the Q6 could have had wireless charging support, but it doesn't. Overall, the phone is small (for this day and age at least), easy to hold, easier still to place in a pocket no matter how skinny your jeans are, and it does bring you a modern-looking screen so you don't feel left out from the prevailing trend of 2017. The price you need to pay for all this is living with a plastic back that scratches quickly and may not look like new for more than a few days. Perhaps sporting a case or skin would be wise then.

The Q6 packs the earpiece above the screen in the smallish top bezel, where the 5 MP front camera and the proximity and light sensors reside too. The bottom bezel only serves as the setting for the pretty subdued LG logo.

The power key is on the right side of the phone - since there's no fingerprint sensor there was no point for it to be on the back. On the left side you can find the volume buttons. The 3.5mm headset jack lives on the bottom to the left, while the microUSB port is centered. In between these two there's a pretty thick antenna line, while to the right of the microUSB port is the microphone hole. Another mic is up top, flanked by a couple of antenna bands.

Right side • Left side • Bottom • Top

The 13 MP main camera on the back sits in the top left area, with the LED flash to its right. The single loudspeaker is towards the bottom, also on the left. Don't be fooled by its grille looking split into two - it's just one speaker inside.

The back • The camera • The speaker • The SIM and microSD tray