The Sony Xperia Z2 Tablet comes with the custom Sony gallery, called Album. Images are organized into groups of thumbnails and sorted by date. You can resize the image thumbnails with a pinch gesture all the way from a grid of tiny, tiny thumbnails to a single image view. The Snapdragon 801 chipset breezes through the task with impressive speed.

There is a second tab here, My Albums, which includes online albums (PlayMemories, Facebook, Picasa, Flickr) along with albums stored on devices in the local network. Alternatively, you can turn the Z2 Tablet into a DLNA server and view photos from the device on a computer or compatible TV.

Also here are some special albums - Maps and Globe, which use the geotagging info to sort photos by where they were taken, and faces, which groups photos by the faces of the people in them.

My albums • photos from around the world • facial recognition in action

Images can be cropped or rotated directly in the gallery. Quick sharing via Picasa, Email apps, Facebook, Bluetooth or MMS is also enabled. Albums can automatically scan a photo for faces.

There's a SensMe-like mode for slide shows which, much like the music player feature, scans files and groups similar photos together.

The video playing app is dubbed Movies and it too has a great custom UI, reminiscent of HTPC interfaces. It's connected to Gracenote, which helps you find additional information about the movies and TV shows you have on the phone. It will even download posters, as well as movie metadata like genre, synopsis, director and cast.

The good news is that Sony has fixed up its codec support and the Xperia Z2 Tablet plays just about everything - AVI (DivX, XviD), MP4 and even MKV. Just about. DTS, DD and AC3 audio are not supported.

Watching a video on the Xperia Z2 Tablet

The video player does support fully-customizable subtitles and gives you access to both sound effects (the same as the Walkman music player) and display settings (X-Reality, White balance and Brightness are of interest here).

The looks of subtitles is highly customizable

A special version of TrackID, TrackID TV, is available out of the box. As the name suggests, it can recognize what show is currently on or you can just check the TV guide. For each show or movie that's on you can view details, images, a cast list with photos and even tweets about it.

The Walkman music player is part of the equipment of all recent Xperia devices. It has Music Unlimited integration and will try to sell you songs, but you can hide the Music Unlimited stuff.

The Walkman interface is based on tiles that sort your music collection by Artist, Albums, Playlists, all songs and even the songs your friends are listening to (but you need to link your Facebook account).

There's a Thumbs up button that lets you post to Facebook directly from the music player or you can let it post automatically for you. You can also turn on a visualizer that flips album art images in 3D.

Sony has improved the Walkman player's settings. There's the familiar ClearAudio+ option, which determines the best audio quality settings depending on the song you're listening to. We liked how it changed the music and carefully accentuated various details.

Dynamic normalizer evens out the volume differences between tracks, which is great if you've mixed multiple albums from multiple sources.

There are music controls the lockscreen. Swiping them to either side brings back the clock. The notification area also offers the now playing screen with music controls and the option to jump into the Walkman player.

The traditional TrackID is available here too, it needs a few seconds worth of a sample to tell you the name and the artist.

The Sony Xperia Z2 Tablet features an FM Radio aboard, complete with RDS support. The app has multiple skins and integrates with TrackID to recognize the currently playing song. You can even directly send an "I'm listening to..." post to Facebook.

The Sony Xperia Z2 Tablet did quite well in the first part of audio output test. It demonstrated a somewhat quiet output and lower than most of its competitors, but it was a perfectly clean one.

Things were still looking good when we plugged in a pair of headphones, but the output wasn't quite so perfect. The stereo crosstalk increased quite a lot and some distortion crept in, although the latter is virtually undetectable to the naked ear. The volume remained pretty low, though. 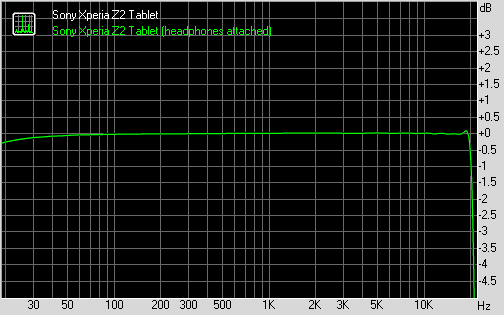