The Apple iPhone 6 Plus has a dual-LED flash, which should give it an edge over the Galaxy Note 4, which packs a single LED. But for the first tests we forced the flash off - smartphone flashes are good at close range only and oftentimes it's all up to the camera sensor.

With OIS on, both cameras can afford to drop the shutter speed quite low, something that's good for static scenes and not so much for action shots. Here the iPhone 6 Plus went all the way down to 1/4s, but that allowed it to keep ISO at a low 125. The Galaxy Note 4 shot at 1/10s, but needed a higher ISO of 400.

The results are pretty clear - the iPhone 6 Plus produced a detailed image with low noise and good colors. The Galaxy Note 4 image was noisier and the white balance is a bit off. Both phones perform fairly consistently when it comes to photos. Again, slow shutter speeds don't work well if there's movement in the scene. 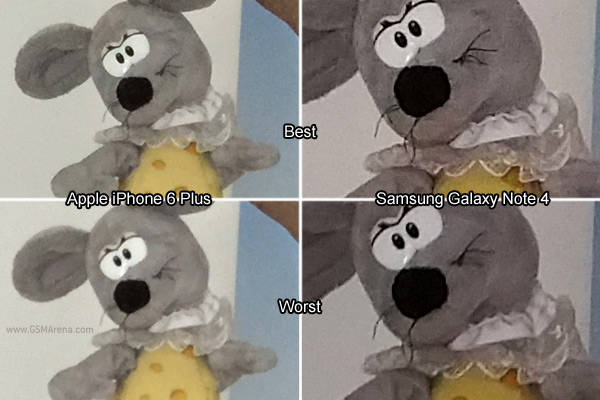 We enabled the flash and the iPhone 6 Plus went up to 1/16s shutter speed, while keeping the ISO at 125. The Galaxy Note 4 again chose a faster shutter speed, 1/24s, and dropped the ISO to 250. The white balance issue is more pronounced and the image has a blue/purple tint.

The iPhone 6 Plus once again offers the better detail, though one photo is blurry. The new camera boasts phase-detection autofocus, which is supposed to prevent misfocused shots, while the OIS should soak up handshake. Somewhere down the chain something went wrong in this photo. 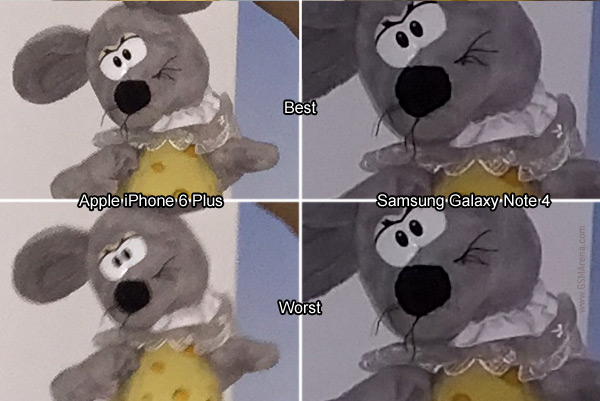 Winner: Apple iPhone 6 Plus. It missed one photo, but the overall results are noticeably better than what its opponent managed. It does so with very low shutter speeds though, which is going to be a problem if there's movement in the scene.

The Galaxy Note 4 color rendering needs a tuning, especially with the flash on. Its faster shutter speeds are nice on paper but the photos have noticeably less detail.

The Apple iPhone 6 Plus can't pull the slow shutter speed trick in video and predictably quality suffers. This gives the Samsung Galaxy Note 4 a face-saving opportunity.

The iPhone videos are noticeably noisier (complete with color noise) and appear softer, even compared to 1080p videos form the Galaxy Note 4. Compression smudges some of the resolved detail in 1080p, but with bitrate restrictions lifted in 2160p mode the Note 4's sensor shows what it's capable of and provides additional detail. Sharpening halos are plainly visible in places but in both resolutions the Samsung keeps the noise low. 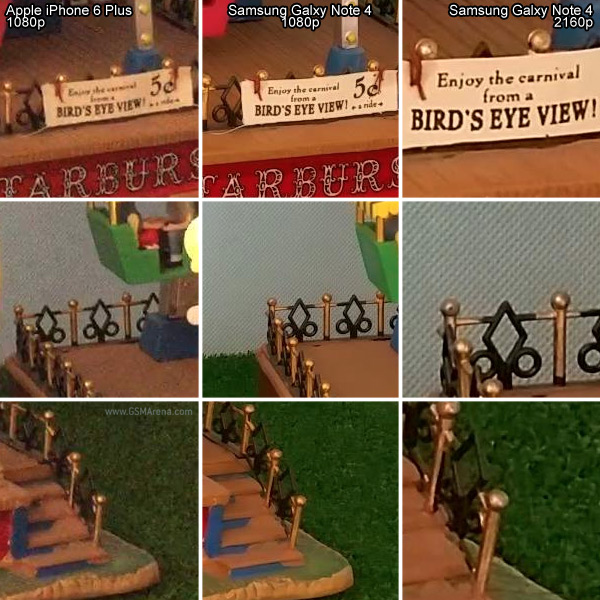 Apple iPhone 6 Plus vs. Samsung Galaxy Note 4 in our Video Quality Comparison tool

Winner: Samsung Galaxy Note 4. It didn't do too hot in the still photo round, but it proved better at videos shot in the dark. The 2160p option came in handy - partly because of its higher bitrate, but the extra resolution wasn't wasted either.

The Apple iPhone 6 Plus relied on slow shutter speeds for photos (along the lines of 4fps), which it just can't do with video. The videos were softer and noisier than those of its competitor.