To begin with, it's a different display technology altogether. The Samsung Galaxy S5 has a 5.1" Super AMOLED screen of 1920 x 1080px resolution resulting in around 432ppi. The Find 7a has the same 1080p resolution but a bigger 5.5" diagonal gives it 401ppi. At a good 100ppi above what has become known as "Retina" level, both screens are impressively sharp.

Under the microscope we can see the different pixel arrangement of the screens. The Super AMOLED screen on the Galaxy S5 is the PenTile variety, with subpixels arranged in a diamond pattern. What this means is each individual pixel isn't made of a standard red, green and blue subpixel like LCD screens. A redesigned panel gives the Galaxy S5 a number of important improvements over last year's model: higher brightness and more efficient backlighting, as well as lower reflectivity.

The Find 7a's matrix has a standard arrangement of red, green and blue subpixels, equal in both size and number. 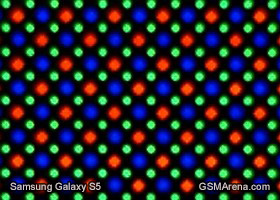 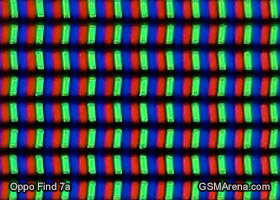 The displays under a microscope

The LCD is great, especially when executed right - but the Super AMOLED has the advantages stacking up on top of each other. For starters, AMOLEDs have the deepest and most power-efficient blacks around. Next up is the practically infinite contrast ratio and, finally, the color saturation. Colors on the Super AMOLED absolutely pop but the Galaxy S5 offers a much more restrained movie mode as well, which keeps color saturation in check, making the Super AMOLED a more balanced offering.

Let's look at the numbers. The table below shows the performance of each screen broken down into depth of blacks, luminosity and contrast at 50% and 100% brightness. The Samsung Galaxy S5 enjoys the deepest blacks resulting in a practically infinite contrast. The Find 7a in turn, manages commendable levels of black at both brightness settings and surprisingly good contrast.

In practice, the Super AMOLED is less bright, like those panels tend to be, and indeed the Oppo Find 7a gets the upper hand here. The Samsung Galaxy S5 isn't dim by any means, though.


The outdoor visibility test measures the contrast ratio of the display under direct bright light and takes into account the reflectivity of the display's front glass.

The numbers show a comfortable win for the Galaxy S5 but the Find 7a still posts an impressive result here.

Looking beyond the numbers, we're glad to say that both displays look very good in bright sunlight and remain perfectly usable. The Galaxy S5's brilliant display just has a slight edge.

Another win for the Samsung flagship here, but that doesn't mean the Oppo Find 7a has a poor screen. We're preparing to be amazed by the QHD (2560 x 1440) screen of the Oppo Find 7, based on a great impression made by the Find 7a.

Both smartphones have 2800mAh of battery capacity so the actual performance should be down to the details of the hardware setup and the software optimization. The Oppo Find 7a has a bigger display, which may take its toll on battery performance. It's important to note that both smartphones also have removable batteries, so you can pop in a spare or replace them altogether.

Looking at the numbers, the Samsung Galaxy S5 has a clear edge in calling with a good 3 hours more than the Oppo Find 7a. The latter did post a very respectable score nonetheless.

Web browsing was about the same, the Galaxy S5 achieving more than 2 hours over the Find 7a. Good scores for both devices here.

And finally, video playback. The Oppo Find 7a has the bigger screen and was able to last for almost 9 and a half hours of video runtime. The Galaxy S5 managed to output 2 hours more, again.

Coupled with the standby times, we get a 72h of overall rating for the Samsung Galaxy S5 and 60 hours for the Oppo Find 7a.

The Find 7a's 60 hours are nothing to be sniffed at but the Galaxy S5 will just last longer - by no less than 20%. Note that the Oppo features fast charging - the company advertises that going from 0% to 75% takes only half an hour. Indeed we plugged in the phone at 10% and about an hour later found it fully charged.

Winner: Samsung Galaxy S5. Though we gotta give the Oppo's fast charging its dues. If during your day you have short periods of access to an outlet, this might be just enough to keep the Find 7a going without any downtime. In any other case, the longer battery endurance of the Galaxy S5 wins hands down.