The field of view for both phones in video mode is about the same. The Oppo Find 7a camera is slightly wider at 1080p, but the difference virtually disappears at 2160p.

Both phones can shoot 1080p (FullHD) and 2160p (UHD) video, we'll start off with the more common 1080p. Here both cameras perform quite evenly, though the Galaxy S5 offers some more fine detail. It saturates colors more than the Find 7a once again, a bit too much. 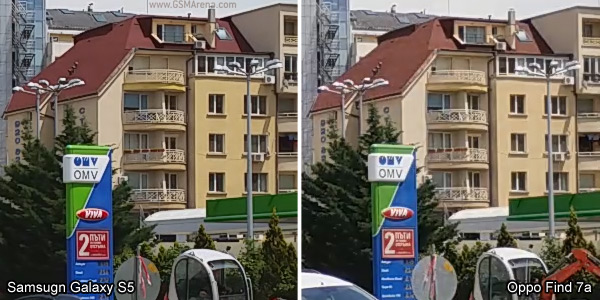 We were leaning towards the Galaxy S5 here until we compared the bitrates for both videos. The Samsung flagship shoots at 17Mbps, while the Oppo flagship uses just half that - 8Mbps. This means that the Oppo Find 7a uses a lot more compression.

The Galaxy S5 uses more advanced compression algorithms, AVC High with CABAC, while the Find 7a uses AVC Baseline. This should have given the S5 a noticeably advantage, but considering the difference in file size is double (60MB vs. 30MB for the 30s videos we shot), the Oppo Find 7a videos are quite impressive.

Both phones record stereo sound at 48kHz using the AAC codec, but the Galaxy S5 has a slight advantage in bandwidth - 128Kbps vs. 96Kbps.

We do have an issue with the Samsung Galaxy S5 though, the continuous autofocus triggers way too often. It refocuses quickly, but there's no need to do it in the first place and the result is mildly annoying.

Moving on to the premium 2160p mode, here the advantage in captured fine detail for the Samsung Galaxy S5 becomes much more pronounced. Detail like the fence on the balconies, the fire escape stairs, the tiles on the roof, even the foliage is much sharper in the Galaxy S5 video.

It's not all due to bitrate either as the Oppo Find 7a closes the gap - it uses 40Mbps, while the S5 shoots at 48Mbps. This is likely where the more advanced codec option of the Galaxy smartphone, coupled with the slightly better hardware and processing pile on for a clear advantage.

Audio recording remains the same, as does the refocus issue for the Samsung. 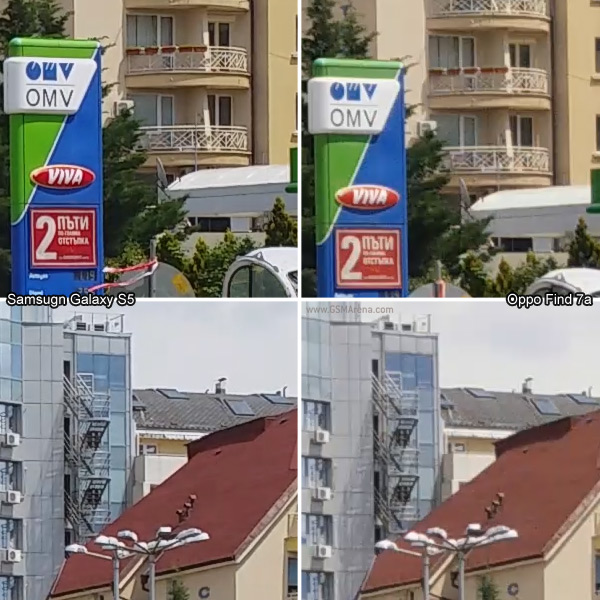 It's important to note that Samsung has a limit of recording only up to 5 min long 2160p videos (even though there's no sign of overheating), while the Find 7a continued to record after the 5 minute mark.

Make sure to choose the 2160p option in the above videos and, of course, you'll need a high-resolution display. Some tablets and laptops have enough pixels on their screens to show the video at 100% but they are too small physically. To fully appreciate the video, you need a large UHD TV. And a device, which is fast enough to playback the video, too.

Winner: Tie. The Samsung Galaxy S5 is technically superior, capturing more fine detail in both 1080p and 2160p modes, especially in 2160p. The constant refocus is a problem to be addressed though.

We consider FullHD videos more important since most people still have 1080p TVs and not everyone has the fast Internet connection and processing power to handle 2160p videos (if you intend to share them). With these considerations in mind you cannot but appreciate having half the file size with only a small decrease in fine detail.

We shot videos with the flash on and off using the same lighting setup as for the still photos. We held the phone in hand. We only shot 1080p videos here as noise and noise reduction are bigger issues in the dark than low resolution.

The Oppo Find 7a was off the mark with the white balance, giving everything a greenish tint. However, it captured a bit more fine detail than the Galaxy S5. Samsung's noise reduction is a bit too strong and starts to smudge away the whiskers of the toy mouse. Not that there's visible noise in the Oppo video.

Neither phone gained much when turning on the flash, we were about 2m / 6ft from our subject. Winner: Oppo Find 7a. While the white balance was off, the Find 7a captured more fine detail than its rival.